I have to admit August has been a tough month for me in my
personal life, there’s just a lot going on and my stress level has been at 11
most of the month. The worst part is there is no end in sight for a few more
months.
But………………..
This month has had its up sides with regards to gaming. I have had a very lucky month thanks to a few podcasts I have mentioned previously, as well as my favorite retro gaming store.
Lucky Break Number 1:
I have been listening to The Retro League podcast for a while now, and I am a huge fan of the show. I actually wrote a review about the show some months back. Now, if you are unfamiliar with the show, let me first of all say that you’re missing a lot so start listening, but I digress.  Every week the hosts Rob and Hugues pick a question of the week at the end of each podcast that is put on Facebook, Twitter, The Retro League
Forums, and that can be answered via e-mail. The questions are always really fun and usually create some great conversations between gamers that involve a lot of reminiscing and story swapping. As much fun as it is to answer the questions on social media, answering by e-mail instead has the special benefit of putting gamers e-mail address into a fan of the month contest. The contest draws a random e-mail address monthly, and whoever is chosen wins a game(s). 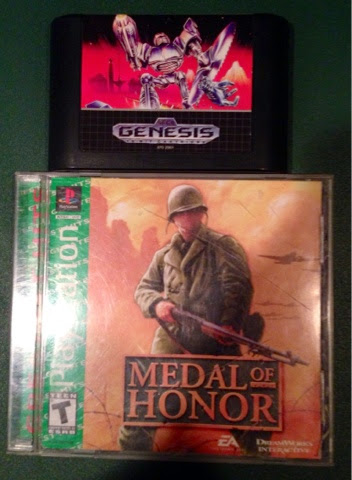 Pic Cyborg Justice and Medal of Honor
When I found out I was chosen as listener of the month I was extremely happy, since it was an honor to finally be chosen. I have to admit that I am actually listener of the month for July, with the drawing taking place on the last weekend of July, but considering how close it all came to August though I’m chalking this one up to being an August lucky break.
Lucky Break Number 2:
Putting in 40 hours a week in a job that has you bound to your desk and spreadsheets all day its easy to run through a backlog of podcasts, and find yourself looking for new ones. With that I have added a few new favorites in the past two or three months including the Upper Memory Block podcast. The UMB is retro-video gaming  podcast about old PC games from the era before Windows XP, often thought of as being the golden age of PC gaming. In early July, Joe the shows host, held a giveaway to win a set of Sam
& Max games from GOG. Much like The Retro League contest this one was done via e-mail as well, and also like The Retro League contest this one started in July, but was ultimately chosen in August. 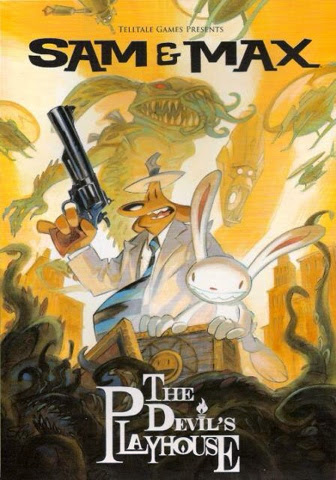 Sam & Max Pic
I’m glad to say I won this one too
Lucky Break Number 3:
Running on the same theme of something in July yielding dividends in August, there is the monthly drawing at my local retro video game
store TNT Games. Basically if you purchase a certain dollar amount in merchandise from these stores they will give you a drawing ticket, with the
mate for the ticket(s) placed in a fishbowl from which the winning tickets will be pulled on the 1st day of the following month (August). The four
winning tickets are pulled and the winners receive a $50, $30, $20, or $10 gift card.  I stopped by TNT round about July 4th, got my tickets and then with the receipt put them on my dresser nearly forgetting about them till last week. I made a quick call over to the store and found out that one of my tickets was drawn, yielding me a $30 gift card.

Pic Tickets
I couldn’t wait to use them and bought Jr Pac-Man for the Atari 2600, Pac-man for the NES, and Pac-man 2 for the SNES, and one non-Pac title Wrecking Crew for the NES (Pac-Man, Mario all front men right?). To say the least it was a good weekend for my son who is currently obsessed with Pac-Man, thanks to the Disney XD’s show Pac-Man and the Ghostly Adventures. 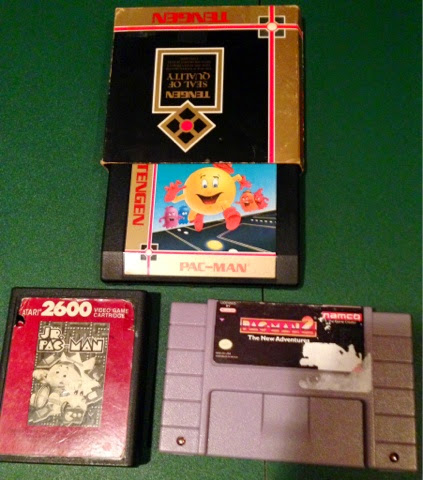 Overall, it’s been a good month for video game contests….now
if I can only get the rest of the month to end well.