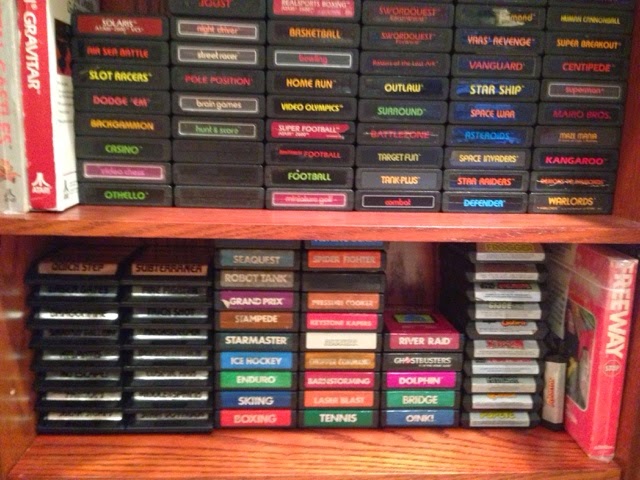 I’m always amazed at how quickly I have grown my Atari 2600 collection. A year ago I didn’t even own a 2600, but by New Years I had 90 games, and now 6 months later I have +/- 200. Of course the rest of my video gaming
collection has grown by leaps and bounds as well, but the Atari 2600 has a
special place in my heart. When I wrote my first article about my Atari
collection in early January, I had to ask what it was that separated
a casual collector from a serious one. What was it that would take me from
someone simply dabbling in an old tech to someone who knows the system and its games with some authority?
I was actually somewhat surprised by the reaction I got when collectors operating in the 300+ range told me that 90 games meant I was pretty much already there as a serious collector. This let me know I was going in the right direction and at this point the serious or casual collector question no longer concerned me, but the future of my collecting did.
Although the climb up to 200 games has come very quickly (less than a year of collecting) that doesn’t mean it hasn’t come with its challenges, and costs. It has required a lot of research, and lot of searching, hitting eBay, video games stores, thrift shops, and garage sales looking for any kind of finds. In almost a year the latter two places have only yielded one game to me, Solaris by Atari which I found a few months ago at Savers for $1.99 CIB. The rest of my collection has been from eBay or my local video game store TNT Games.
Another challenge with collecting something like this is always picking a place to start, and deciding how you’re going to collect. In another one of my hobbies, Record Collecting, I find myself wandering around a bit collecting somewhat aimlessly, adding music I like but without any key
goals. It’s nice to do things that way, but you really never know what to
collect next. Luckily, having been a 2600 owner once before I knew what games to get, but at the same time once I re-bought all the games I owned years ago there was no other direction following. Suffice to say that didn’t last for long. Being a fan of the Atari 2600 Game by Game Podcast, and a user of Atariage’s website it didn’t take long for me to find new direction. Thanks to Ferg and his amazing podcast I was inspired to begin collecting based on game publisher/developer, something that has worked out well and allowed me to navigate through the 700+ games of the Atari 2600 world with a little more ease.
Collecting by publisher/developer provides you with a challenge, as you try to figure out what games the publisher/developer made for the platform and then try finding them. So far I have collected for iMagic, CBS Games, Mythicon (yuk), and the Xonox complete libraries, with the goal of polishing off Activision, Parker Brothers, and Absolute this year. Of course collecting
via this method can come with some costs since some titles can be far rarer
than others, part of why the latter three are still in progress.
Crossing the 200 barrier does come with some caveats though, or so I have been warned by other collectors. Once you reach the 200 mark the climb to 300 isn’t so easy, as games become rarer and rarer, since the first 200
games tend to consist of the more popular, and readily available titles. I have no doubts this is true as every tier (as one collector told me) of a 100 games brings you deeper and deeper into the rare. You go from $.99 copies of Space Invaders to $150.00 copies of Swordquest: Waterworld, and Chase the Chuckwagon.
So to all my Atari 2600 collectors out there, where do you stand on all this? What is collecting to you? How have you built your collection? I look forward to hearing from you all.