Time to Get Out the Old…VHS Games???

Here in 2014 with nearly 40+ years of home console and other
consumer based video games behind us, we have seen a lot of really odd things. Some made sense, some didn’t, and still yet some leave us saying “WTF!”. For instance here in 2014 the thought of someone playing a video game on their telephone is both common place and common sense, but could you imagine the thought of playing a video game on your telephone in 1987? It would have not only been odd, but nearly unimaginable. Yet 1987 yielded one of the oddest ways to play home video games we had ever seen.
In a world of DVD and Blu-Ray players having movies that are
interactive at home is a norm. In-movie commentary, supplementary camera angles, trivia, and mini-games are all common. But in the world of VHS tapes your only options where play, fast forward, rewind, stop, and pause, no games or bonus material here. Yet in 1987 the toy industry gave us VHS video gaming. Yes 1987, in the height of Nintendo (NES) fever, and with other classics such as the Atari 7800, and Sega Master System available they suddenly gave us VHS gaming. 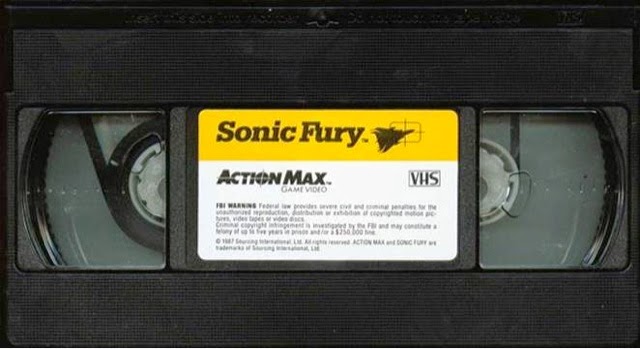 Being a kid in 1987 and watching these toys/video game
systems come out, I can say I was interested in how they were supposed to work, but really had no interest in actually getting one. Even two years later in 1989 when I saw a Captain Power set on clearance at a Kaybees for a few bucks, I still had no interest. For the most part I forgot all about these games over the past few decades until I tripped over a Captain Power fighter mixed in with a group of other toys on eBay last year. Actually, I didn’t know the name of the toy or game system but the flood of memories and curiosity as to how a VHS video games worked made me look it up. 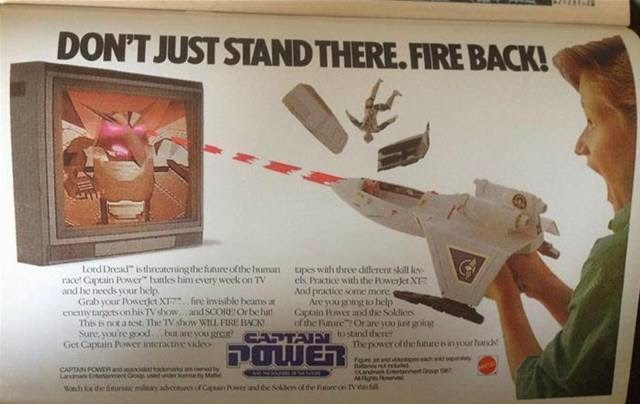 When this fad in gaming hit in 1987 it produced a lot of imitators hoping to get on-board the interactive TV (as it was seen at the time) craze. But of all the systems to have been developed in this time, two are more
well known than all the others, Captain Power and The Soldiers of the Future, and the Action Max system. The Captain Power system was probably the more interesting of the two, in that it involved toys, VHS tapes, and even a television program, as to where the Action Max involved just VHS tapes, and a somewhat strange console system. Ultimately though both systems worked the same and had equal results for players.
Now if you’re like me, your modern adult self probably has the
same curiosity about VHS games as you did as a kid, trying to figure out how it works and how it was supposed to be fun. Keep in mind whatever is on a VHS tape isn’t going anywhere unless you tape over it, or splice edit it. Putting a game tape in and trying to interact with it to make changes, is about the same as trying to interact and change old vacation tapes, like trying to tell your old self not to wear a particular shirt, or buy some stupid item and hoping your old self listens. Basically, as the game tape is played nothing changes, enemy fighters don’t explode, bad guys don’t fall down dead, and the outcome of the story never changes based on your level of interaction. So whether you sit on the couch and watch, and pick your space ship or gun up and fire away like a mad man nothings changes the final outcome.
With that said this doesn’t necessarily mean that VHS gaming isn’t fun, it’s just not going to be as fun as traditional video games especially when you had the third generation Nintendo, Atari, and Sega trifecta on the play field.
Captain Power and The Soldiers of the Future as I said previously is probably the most interesting of all the VHS gaming systems to have come out of this fad. It was unique in a few different ways, first of all it had a line of toys that both acted as the interaction tool (the controller/light gun) and as a good old fashion space toy that could have put action figures into and felt as at home in the play room as they did the living room. Considering that a
Starfighter with a tape went for $30 – $40 new, and that add on tapes were $20, parents probably liked the duality the toy/controller combination. But, what also added to the short lived lore of Captain Power was the TV show, that gave users the additional opportunity to use there controller/toys on the 22 episodes of the program that would air. 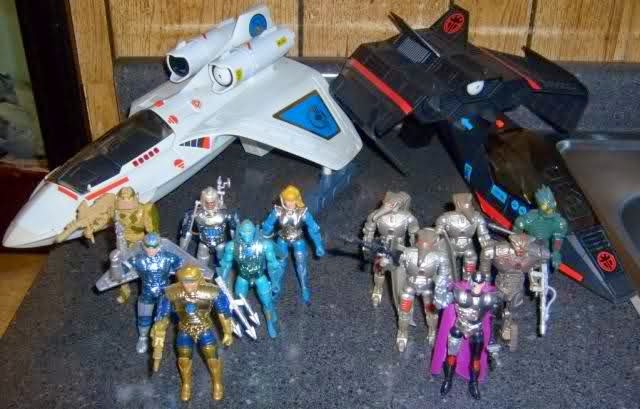 The Captain Power toy/controllers worked very simply in the fact that they were all space ship shaped light guns, not to different from the light guns we saw on systems such as the NES. As target images would pop up on the screen they would all have targeting circles in them that if hit correctly with a light gun signal, would cause the light gun to register a hit on its digital score keeper. This in a nut shell was how the game was played, with the challenge not being to win the game, or change the outcome but rather to try to beat your score or the score of someone playing with you. In a way it’s similar to the concept of a shooting gallery where all you have to show for it in the end is your score.
The Captain Power series lasted only one season from 1987-1988, and although the toys and series where short lived, the series itself did receive some critical acclaim when it was on. Despite being somewhat corny in nature each episode had a pretty high production cost estimated at $1 Million an episode, and many considered the acting and plot lines to be pretty well done considering the nature and core
audience of the show. The show was even known to keep some adults entertained, with plot twist and subtly presented adult themes. Despite being fairly obscure hard core fans of the show have managed to get some interest from video game developers in a revival, although most of that is still speculative.
Then there’s the Action Max…..
Now, I don’t know if you saw this or not, but around Christmas time there was a comical little internet mame floating around about a kid asking for a XBOX ONE, or PS4 and receiving and Ouya instead, from a well meaning but clueless parent or grand parent.
If this mame were to be applied to the Christmas of 1987 instead of 2013, the child rather than receiving an NES, Atari 7800, or Sega would find that they had an Action Max under the tree instead. You know because it’s a video game “console”.
Yes, the Action Max was set up to look like a video game console. Now traditionally a video game console takes a cartridge, or a CD, or even a card, and I’ve even heard about a few that take 3.5 inch disks, but the Action Max didn’t take anything at all. That’s right even though the Action Max is set up to look like a console it still required the use of a VCR. All the Action Max really did was control the light gun and keep score.

Now considering that the Captain Power toys were individual units and could keep scores right on light guns themselves, it seems rather odd that the Action Max required a console to do the same thing. Why they just couldn’t create a light gun that had a way of keeping score right on it I have no idea. My best guess is that they were hoping to achieve some success with the scenario I presented above, with regards to looking more like a traditional console so that parents would be more likely to buy them to satisfy kids eager to get an NES or one of the other 8-bit systems of generation 3.
With that said though the Action Max, did achieve some level of success in 1987. Unlike Captain Power, the Action Max gave players the ability to participate in a variety of scenarios, these included a haunted house, air-to-air combat, submarine warfare, a Hogans Alley, and one based on the movie Blue Thunder. More videos had been planned, but due to the Action Max’s limited success as with the rest of the VHS video gaming genre, the “console” and any future plans for it were discontinued.
But the Action Max was part of, and did leave behind an interesting legacy. Many believe that the Action Max, was a descendant of the failed NEMO System developed a few years before. The NEMO System became infamous in the early 90s as system that the video game Night Trap had been developed for. This occurred after Sega had been grilled by a US Senate subcommittee about Night Trap’s violence, and other video games had it in them. To say the least many who have played the game Night Trap believe that had the Action Max survived past 1987, Night Trap may have been released on it instead, due to the games VHS type quality of gameplay.
Obviously the lifespan of VHS based video games didn’t survive much past 1988, but the fact that they even survived that long is pretty surprising to me. Especially, when these products shared the marketplace with video game systems like the NES, Atari 7800, and the Sega Master System all of which had light gun based video games on them. Yet the manufactures of these VHS-based products must have speculated that there was a market for them. A telltale sign of this is the fact Mattel would pour nearly $1 million into each episode of Captain Power, and that the marketplace began to see several imitators trying to get in on the business as well.
Ultimately the big issue with VCR based gaming is that it was an interim technology that was really never able to find its place or niche. Today such things as full-motion video and animation between video game levels, and DVDs with interactive games and features almost seem to take on the same exact job that these early VCR games were attempting to fill. In many ways I can’t help but feel that developers of these VCR-based games were looking to fill a hole that video games and entertainment had in them at the time. By the time VCR based gaming systems would come into fruition though, those holes we’re slowly but surely starting to be filled in and VCR based gaming technology suddenly found itself looking at obsolescence before it had even gotten off the ground. This would become evident in 1988 when the first CD-ROM drives where being developed, and Sega was only a year away from releasing the first 16-bit console. By Sega 1991 would release a CD based add-on system that would perform better then a VCR based system ever could, with better effects and more enjoyable game play.
If you had either a Captain Power or Action Max system please feel free to let me know what you thought about the systems. Also if you have any Captain Power items you want me to try out please feel free to send them my way.