Getting a Case of the NES Blues….I mean Reds!

To me the NES is the epitome of a retro gaming system. As big of a fan of Atari as I am, there’s nothing like the feel of opening the door on the NES, putting the cartridge in, pushing it down, closing the door and hitting the power button. You feel like your not just playing a video game but starting an adventure.
Over the past six months I’ve grown my NES collection to nearly twice the size it was when I walked away from my NES in the mid-90’s. Many of the games I added are classics, those NES essentials anyone who lived in the NES era, could tell you that you had to have to experience the NES in all its glory.  A funny thing happened as I began to add new games, the NES began to act up a bit with having to take the games out and put them back in again, or blow in them to get them to work. Then there was the day I put Excitebike in for the first time, and got glitches galore. After that my games began glitch on and off until that one dreaded day.
I remember it clearly I just got Pro-Wrestling, I put it in the NES turned it on and…..nothing. Just that red blinking light. “Ok!”, I said to myself “this isn’t anything, I will just check everything over again”. I open the NES door, is the game down all the way? Yes! Is it in all the way? Yes! So I take the game out, blow in it, and put it back in…nothing. The red light is blinking like there’s no game in the machine at all. I take Pro-Wresting out and put my tried and true Super Mario Bros. 3 in, still nothing.
Do you know what the blinking red light means?
If you don’t it means that the system can’t read your game, i.e. you need a new 72-pin connector.
OR
It means that your lockout chip is malfunctioning for whatever reason.
In NES’s this age both are pretty common, it’s like the cold or allergy’s debate when you start sneezing and getting a sore throat. The question becomes what do you try to treat first.
For most of those in the know about NES repairs, the 72-pin connector is the first suspect. 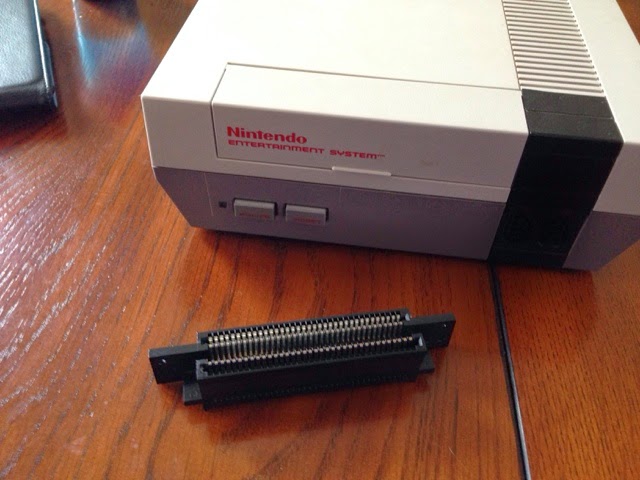 I haven’t got a clue why these go bad, but  for whatever reason they do. The weird thing is that a 72-pin connector is nothing but contactor’s and plastic, so how can they go bad? You got me.
Now, I’m not going to tell you how to replace your 72-pin connector because there are a ton of videos on YouTube as to how to do that. Here is a good one:
http://youtu.be/TZhq7EzSKNE
What I can tell you about though, is the 72-pin connector. If you decide to replace it yourself you can usually find a new one on eBay for about $15 shipping included. I can also give you a few warnings about installation the videos may skip around, after all these guys are pro’s in the videos so changing these things out is old hat, for you and I on the other hand, there may be some surprises. 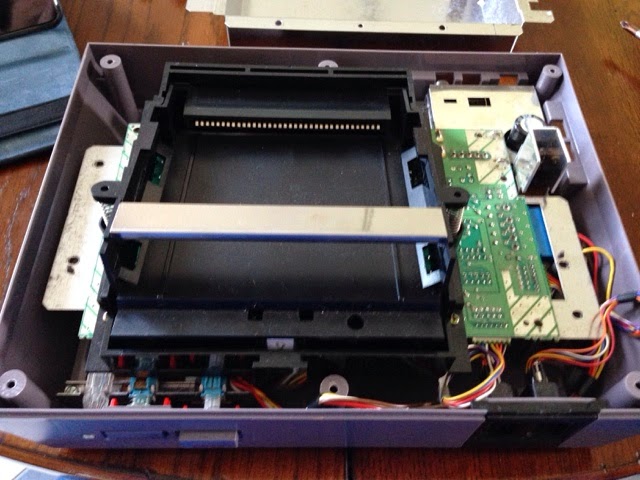 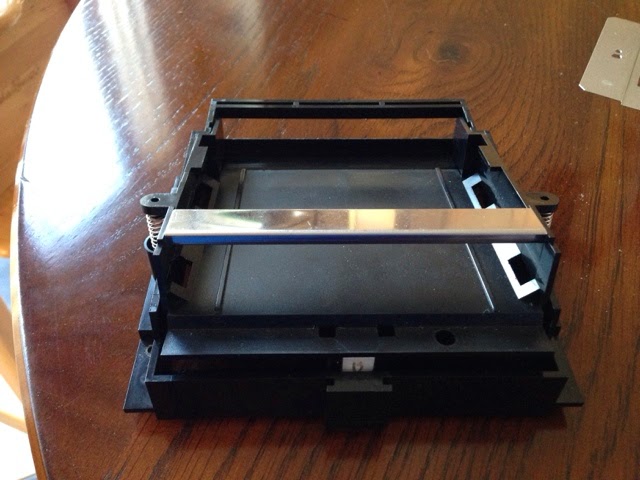 This thing is called “the sled”, and you have to get it off to get to the 72-pin connector. The videos will make it look like you slide it right forward but if you do that you will notice it’s not going anywhere. 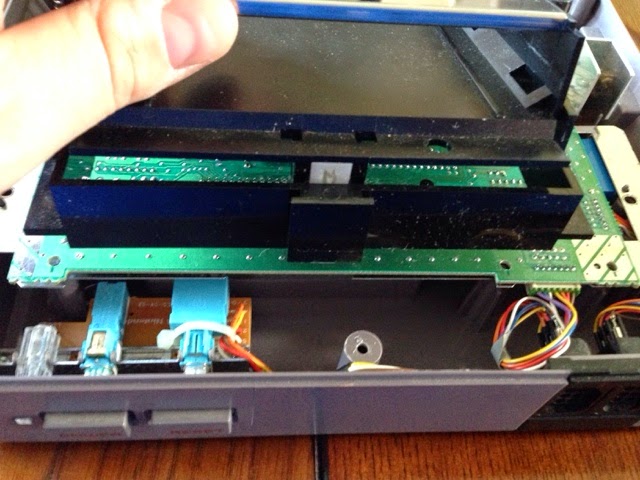 Reason being this is where one of the screw holes that attaches the bottom and top case is. 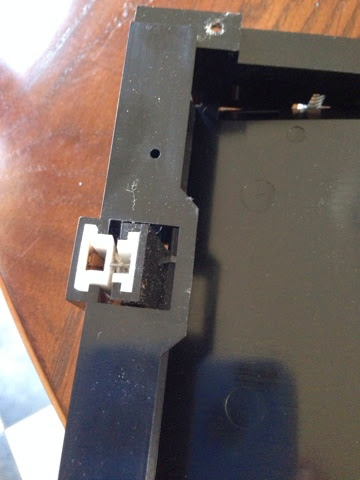 Than there is a tab on the bottom of “the sled” that keeps this from moving. What you need to do is make sure you took out all the screws for attaching the motherboard to the bottom case so you can pull the motherboard up and “the sled” away.
Also the 72-pin connector itself is a bitch to get out. You’ll find yourself having to exercise a bit of force to get it off, and you my be inclined to even use a screw driver to do so but whatever you do, DON’T USE THE SCREW DRIVER, just keep working it pushing it back and forth, and it will come loose. It’s pretty much the same story putting the new one on.
With that all said though let me tell you that although the 72-pin is usually the prime suspect, I would try to fix the lockout chip first. Why? Well first of all the lockout chip will give you the same blinking light, blocky games, and/or eventually cause your NES to stop working. But unlike the 72-pin connector disabling the lockout chip can be done without having to buy anything.
Here is a great video on how to do it:
http://youtu.be/i3vL5TE0UQo
If you watch both videos you will see that the process of installing a new 72-pin connector has you 95% into the process of disabling the lockout chip. Now, the video will tell you to disconnect the wires coming into the mother board, however if you are careful enough, you can access the chip and disable it without disconnecting the wires from the board. I was able to do this more than comfortably. 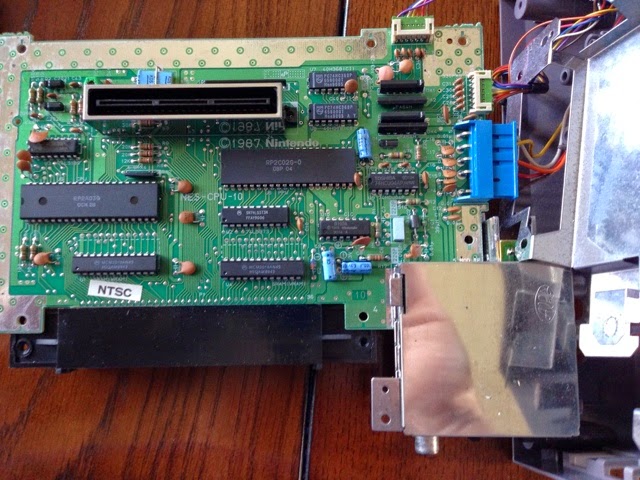 The lockout chip is a tiny little thing about a half an inch long and no more than a tenth of an inch wide. 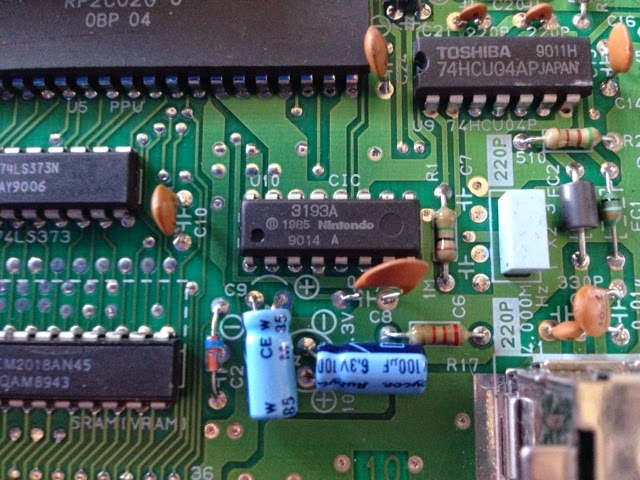 Look for that 3193A and Nintendo on the chip, if it doesn’t say that your looking at the wrong chip. Also in some of the videos you may see the blue capacitors standing and the brown pushed over but even vice-versa you are in the right spot.
When it comes time to pull the forth pin the video is 100% right you will need something like a pin or safety pin to pull it. I would suggest a safety pin for more leverage although pulling the forth pin is hardly a tough task. 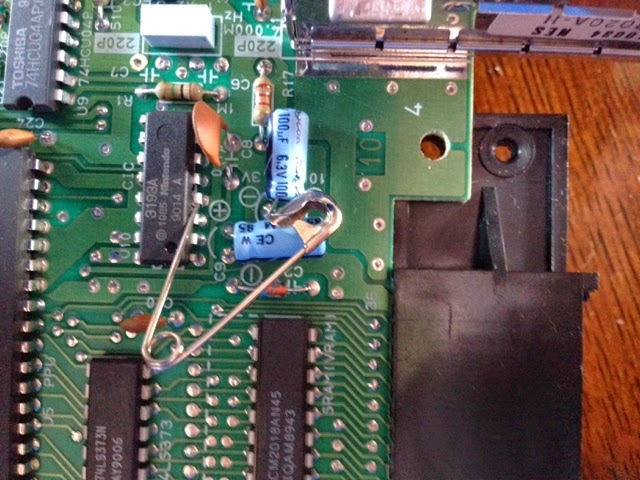 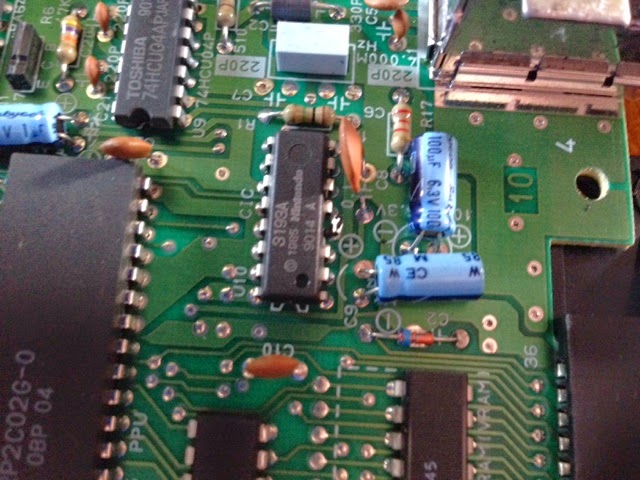 If you still have issues after this then replace the 72-pin connector too, disabling the lockout chip won’t have any side effects if you’ve misdiagnosed your blinking red light dilemma.

Overall, it’s a pretty easy fix no matter which way you go.