Friday May 20, 2016
Well, its been a long five weeks since I posted last. A combination of long Fridays, and traveling have lead to my game play plans basically taking a backseat. I’ve either just not been around, or been too tired to stay up late, both of which have lead me to take some time off from late night gameplay. With that said it doesn’t mean things haven’t been eventful on a gaming level. For instance three Fridays back I picked up my first arcade machine an old Namco Air Combat system complete with cockpit. The Friday after that would mark the first time I was finally able to get the machine into a spot where I could play it in my garage, and last Friday finally down to my basement. I’ve also added new games over the past few weeks including some Friday buys, but since those Friday’s are past I will only mention them if they’re played.
This Friday’s Buys

R-Type (SMS) – To continue on with my current flirtation with SHMUPS I decided to add this one to my SMS collection. According to the podcast Master System Masterpieces this game actually plays and looks really good, even if the backgrounds and enemies can look a little disturbing (as in true R-Type form). Overall though, it’s said to be a credit to the Master System and the R-Type franchise. I can’t wait to play it.
Space Engineers (PC-Steam) – Imagine MineCraft set in space and with physics playing a much larger role in game play, and you have Space Engineers. This was on sale this weekend through Humble Bundle, and my son has been pestering me for a while about getting it. From what I’ve seen of the game on YouTube it looks pretty good, and I can’t wait to play with it a bit before handing it off to my son just in time for Summer vacation.


SHMUPS R’US! Over the past few weeks I have added a more than a few SHMUPS to my collection for the SNES, NES, PS1, PS2, XBOX 360, and Sega Saturn. For the most part these follow such famous SHMUP franchises as Raiden, Gradius, R-Type, and Capcoms 194x series, but I’ve added a few other  SHMUPS as well. Of course I’ve also added some non-SHMUP titles too including last Friday’s buy Friday the 13th  for the NES, in honor of last Friday’s date, the 13th. 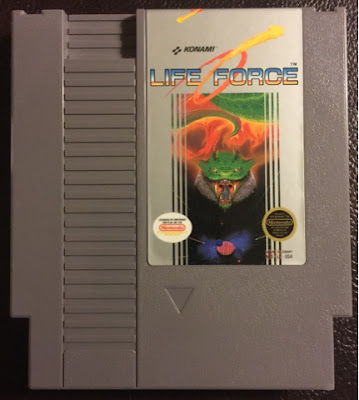 Life Force (NES) – This NES classic is also known as Salamander, and is a spinoff of the Gradius series. The basic plot of the game as I understand it is that you are attacking some sort of monster in space from the inside out. It’s kind of got some of those gross bio-horror aspects to it like R-Type.

After a few minutes of playing it I could see why it’s considered a classic, but with that said though I did have some issues with game play. For instance I found movement to be a little stiff, and the weapons weren’t exactly as intuitive as I have seen in other SHMUPS, even those on the NES. Overall, it’s a good looking game, and I will probably return to it later. 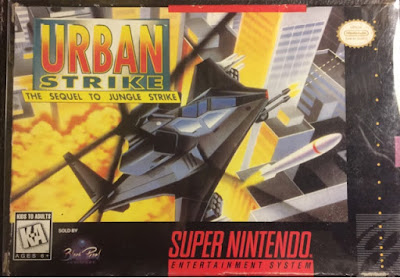 Urban Strike (SNES) – The “Strike” franchise of games are also considered SHMUPS, but with that famous “2.5D” perspective. Basically it’s somewhere between a SHMUP and a helicopter flight sim. In case your unfamiliar with the “Strike” franchise, it’s basically a series of helicopter shooter games with varying missions all of which have “Strike” in the name. Urban Strike is just one of three of these titles on the SNES, with Desert Strike and Jungle Strike being the other two (both of which are in my play pile). The plot of the games in the “Strike” franchise are all pretty much the same, your a special forces helicopter pilot out to destroy the bad guys super weapons, foil their evil plans, and rescue people.

Despite the hackneyed plot line it’s actually a pretty fun series. For me the controls felt off a bit for this one, but perhaps that’s the Retron 5 controller, or maybe it just takes time to get the controls down. Overall, it’s not bad. 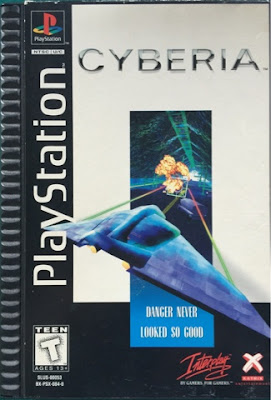 Cyberia (PS1) – This is actually a pretty good looking and fun little game, and I wish I could have spent some more time playing it. If you know anything about the PS1 and the era it came out in,  it explains a lot about this game. This after all was an era that was Goldeneye and Perfect Dark crazy, plus Cyberpunk was all the rage too. This game which I believe was originally developed for the PC has all those elements in it. Essentially the plot revolves around industrial espionage and stealing a nanotechnology device known as “Cyberia”. I’m sure the game goes deeper than that, but it’s as far as I got.

As far as game play it should be first person, but it’s not, rather its third person and your main character can only move in four simple directions (forward, back, left, right), which seems counter-intuitive with game play in that era. Once you move past that though you find out pretty quickly that this is more of a story telling adventure, and FPS type controls aren’t really needed. Overall, I would say it’s worth adding to your collection if you want a game that epitomizes the era of the PS1, and thats easy to pick up and play, as well as come back to.

With that said I really didn’t get a chance to play any additional titles for this weekend, but hopefully there’s is always the next. I did however get the chance to play with my iCade this weekend, which has really undergone a lot of changes and has had additional apps added to it since I played it last, but that’s an article for a different time. Hopefully next weekend I can kick off the holiday with some heavy game play, good eats, and Tiki drinks but its a long way till next Friday, so its time to just bear down and hold in there. Till then!