Trekking Through Games – A DS9 Kind of a Tuesday 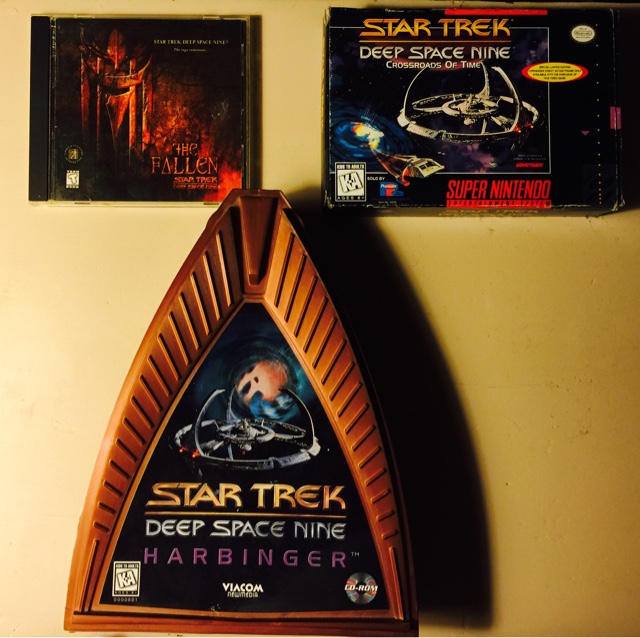 Per my previous entry in this series you can probably guess that I am a bit of a DS9 fan. I’m not necessarily going to say that it was the best of all the Star Trek series, since each is generally good in its own right. What I will say though is that of all the series DS9 had some of the richest, and deepest plot lines, and at times it had an admirably gritty feel.
Of the three games I played The Fallen is probably the best known, and the fan favorite. In just the few minutes of it I was able to play this afternoon I can tell you it’s definitely something I want to come back to, and hopefully like the other two games here do a review of at a later date.
In the meantime here are my impressions of the three games:
Crossroads of Time – Of the 3 DS9 games for me today this is the only console/SNES entry. It has a platformer feel that somehow reminds me of the Rolling Thunder games. Unlike Rolling Thunder though the game requires some problem solving and a few RPG elements.
The Fallen – This is a Windows 95/98 entry, and is actually set between the 6th and 7th seasons of Deep Space Nine. Although the game itself is not canonical with the series itself, it’s often fun to see a game insert itself into a series in that manner. In a sense it reminds me of the Star Trek FPS Star Trek: Voyager – Elite Force which is set against Voyager’s 6th and 7th season as well. Unlike Elite Force, The Fallen is a third person shooter, and by that I mean one in which you can see the character you are controlling in a 3D environment. As I said previously The Fallen in many circles is considered to be a top five favorite for best Trek games.
Harbinger – This is one of the first DS9 games pre-dating Windows 95 to the DOS era. I can best define it as a point and click adventure, which although fun in some respects isn’t as exciting as many other Trek games. I guess one of the things I like most about this game is its unique box called the “phaser” box, although I don’t know why it was called that.
I guess as far as the PC goes there is a third DS9 game The Dominian Wars which is something like the Starfleet Command games, but set against the backdrop of the Dominian Wars. Once past the 16-bit console era though not much else appeared in the way of Deep Space Nine games on consoles. Crossroads of Time had a version on Sega Genisis as well, but it’s roughly the same exact game as that on the SNES.
So happy “DS9 Tuesday” or Scott Kelly Day.