The Stanley Cup Western Conference Playoffs have been a real nail biter for us Blackhawks fans. By the time some of you read this you may know the fate of the Hawks, whether the are out of the standings or alive and well and in the finals. But for now on the morning of Friday May 30, 2014 they are at 2 games to 3 against the LA Kings in the Western Semi-finals.

But for the last few weeks as the finals have narrowed down the remaining competitors I couldn’t  help thinking about hockey in the world of video games. 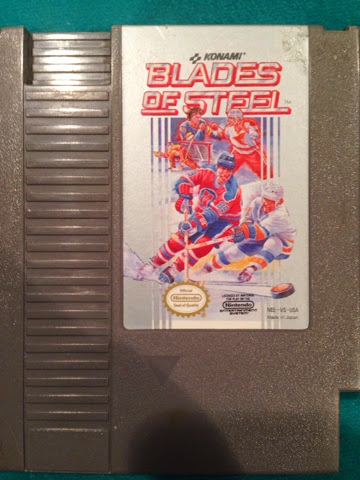 For me there are two favorites the above classic Blades of Steel on the NES, and the below Ice Hockey on the Atari 2600.

Now, I know what your saying “really all the great NHL 20xx, games out there and you choose these two?”. The answer is “Yes, I did”. You see I think the thing that is missed with modern sports games is that they get too serious. It becomes to much about picking the right players, and stats and drafts and all that and the fun of just playing a silly hockey video game gets sucked out of it.

Activision’s Ice Hockey on the Atari 2600 for example is just straight up hockey based fun. No picking teams, or even colors, just four guys on the ice playing hockey. It looks like kids playing hockey on a frozen pond in the middle of winter, just having fun, and that’s exactly what the game is fun. In one or two player, mode it’s a blast.
Jump ahead one generation to the NES and Konami’s Blades of Steel. OK, this is a little more complicated than Ice Hockey on the 2600, but its still a load of fun. You play in something that actually looks like a hockey stadium, you choose a team, period length, and your basically off after that. You want Blackhawks vs Kings you can do it on this game. But here is the best part, “fights!”, that’s right fights break out on the ice and you even get to participate in that as a player. So not only is it hockey it’s a little bit boxing too. Yes, it really is as much fun as it sounds like.
You see the point of these games is to just have fun, and that’s exactly what they are. If my NES wasn’t on the fritz again I would be inclined to play through the Stanley Cup in Blades of Steel just for the pure oddball pleasure of it.
Even if you aren’t a hockey fan you have to get one or both of these games just to experience them, you won’t regret it.
By the way Go Hawks!!!!!