The Atari 7800 and I, have a complicated past dating back to 1988. It all started when was given an Atari 7800 for Christmas that year, that I quickly found out didn’t work. Of course it was no major loss since I got my Atari 2600 Jr. out of the deal. But I always thought that someday I would like to own an operating 7800. Of course I jumped ship to my NES the following year, then PC gaming a few years after that, and so on and so forth.
Then for a Retro Gaming New Years resolution last year I made acquiring an Atari 5200 and 7800 one of my goals for the year. In a previous posting I covered the first part of reclaiming a 5200 into my collection, but there was only about a weeks deference between the arrival of the 5200 at my house in March, and the arrival of my 7800. 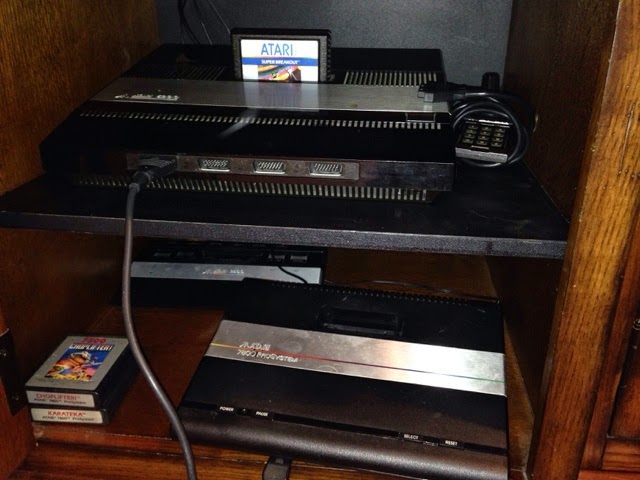 The 7800 as you can probably guess was an eBay buy. I picked it up for less then $40 with a small stack of games included. The seller stated he “didn’t know if it worked”……but “the last time he played it ten years ago it did”…..and “he was unsure how to hook it up to a modern TV”. So even though I picked it up for a great price, there was the risk it was broken, but I guessed it was more that the seller didn’t know how to operate it, and I was right.
It came in a huge box that was overkill for what was inside. Luckily, though everything was wrapped up tightly in bubble wrap and not much shifting around occurred. The one major issue I did see opening it up was that the RF adapter was rusted to hell, I mean it was shot. Of course messing with retro systems this was a non-issue since it could share a cable with my 2600. 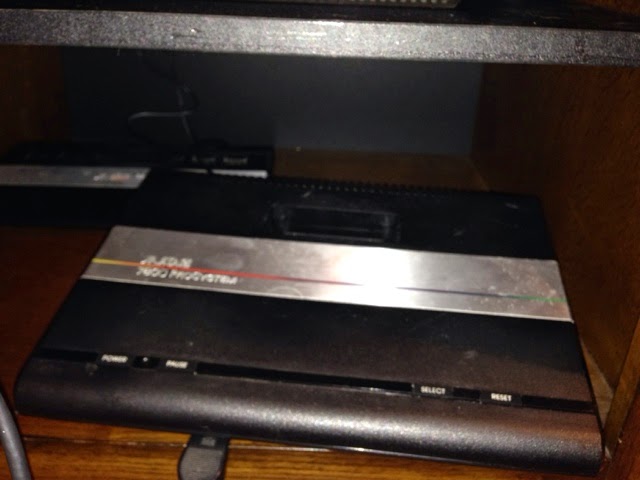 The shared cable worked ok, but my Panasonic Plasma TV disagreed.
A Case of Horizontal Hold
Back in the era of old tube TV’s horizontal and vertical hold were always an issue. You had to flip open a hidden control panel and mess with some knobs so you could fix one or another. On modern TV’s though there is no such luck. 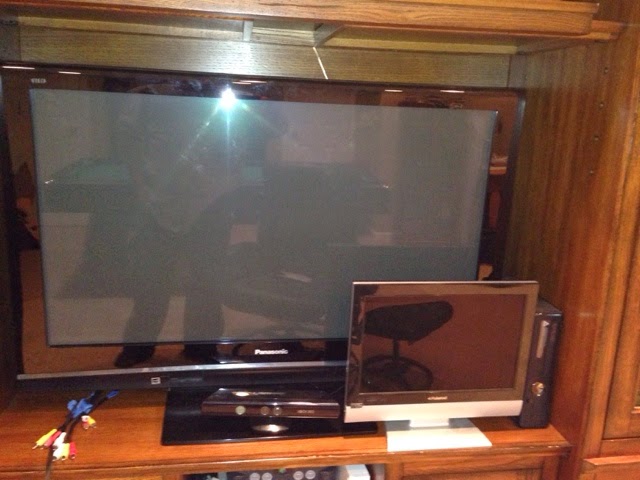 Now around tax time I bought the family a new and bigger Panasonic and took the old one for the rec room finally replacing the little 17-inch Polariod TV I have been gaming on for months.

With the small Polariod on the floor of the rec room I pre-tested the 5200 and 7800 before digging behind the entertainment center to hook them up. Both systems when tested, worked well, but once in my “Atari cabinet” the huge Panasonic couldn’t keep horizontal hold of the 7800 picture. I rechecked cables and changed out games but always had the same result.
As it turns out that modern plasma TV’s aren’t always to crazy about retro tech, and horizontal hold issues could sometimes be a result. Luckily there is a fix! But, be ready the fix is retro tech itself. A VCR! That’s right a VCR! You see later models of VCR had the uncanny ability to adapt old technology inputs from co-axial cables into stable A/V output using RCA cables. So after digging out and hooking up two different VCR’s I got one with a remote that allowed me to do this. This means that the VCR inputs a Daisy chain of NES, Genesis, Atari 5200, 2600, and 7800 goodness into one stable RCA r/w/y output coupled with the added bonus of a working VCR.
My first game played was Sneak N’ Peek, no joke, it was the game near me where I was working on my 7800 dilemma. It did look good in all its weird glory on the 7800 though. I switched to Karateka after that, which was an old favorite from my school days, and that is when I encountered my next issue, the joystick.
The joystick that came with that system for whatever reason didn’t want to allow me to go to the right. After switching Karateka out for Choplifter it was confirmed that it was the joystick, and not the games. Unlike my other issue with the horizontal hold, and the RF box, this wasn’t such an easy fix.
I opened it up like and gave it a good cleaning, but found that after that I only got intermittent movement to the right. My next step was to buy a new one, even if the one that came with it could work I still wanted a second controller. My local Retro game store TNT Games had Atari 7800 controllers for just shy of $8 a piece. Once I got the new one home it became apparent the old controller was shot, and game play was easy (as it could be for a 7800) with the new controller.
Overall the 7800 was a fairly good bargain with the only real issue being the controller. But I have my doubts whether the 7800 could hold its own in Gen 3 against the NES. But that’s a different article. For now my Atari resolutions are complete and my childhood dream of having all three systems donning their black and stainless look is complete as well. Now on to collecting 7800 games, trust me Midnight Mutants, and Ninja Golf are a tall ($) order, but they will be mine.