Historically, it looks its been a busy year for Nintendo. A few weeks ago we celebrated 25 years of the Game Boy, and today we are celebrating 30 years of the NES in North America. Once again I wish I could have written something more in depth for today, but I’m a bit caught off guard, again.

For me the NES came into my life, later in its own life cycle for Christmas of 1989. My system (which I still own and operate) came with the Power Pad, light gun, and triple game cart including Super Mario Bros, Duck Hunt, and World Class Track Meet. I also believe I was given Super Mario Bros 3 that Christmas as well. 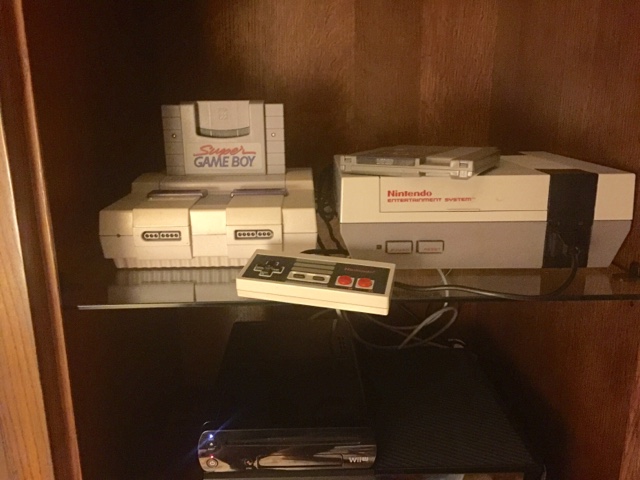 My NES and its descendants the SNES to the left and below it the WiiU. My collection also has an N64, GameCube, and Wii on standby.

My NES  initially may not have been a huge go to system for me, but it has always inspired me. My NES would be a huge influence in my getting a Game Boy back in 1990, since I was so impressed by my NES, I decided I needed it’s new mobile companion. Then in 2011 my NES would inspire me to get into retro gaming, after I found it and hooked it up to my TV following years in storage.
The simple collection of 14 games I had when I put my NES away so many years ago has now increased to a 175, and having it has encouraged me to explore many of its contemporaries, and those systems before and beyond it.
As I said I wish I could write more, and I have in the past, and no doubt will in the future. For now though Happy 30, my iconic, temperamental, beautiful white and grey box.