Having a gameroom of any kind isn’t easy when you have a family, but sometimes you do luck out. In my case it was the a-typical basement that became my mancave or as I preferred to call it my gameroom. When I first moved into my last house the finished portion of the basement was where the spare pieces of furniture and other decor quickly collected. As the first few months passed and the main areas of the house began to become de-cluttered of moving boxes, I finally had the first opportunities to begin transforming the basement into an area for my games.Sadly, time became a premium and what should have been a simple weekend project failed to get done. Then one fateful day when I went to work sick, and had an equally bad day there, I came home to find that my wife and oldest son had taken the day to work on the basement for me including putting up decor. All I can say is that it changed a bad day into a very good one quickly, and I must have just sat down there just looking around at everything they did, for an hour after they first showed me their accomplishments.

This was the turning point that would finally allow me to hook up many of the systems I owned at that time, and to begin unpacking, playing through, and cataloging what games I had. Two months later I would finally get my Atari 2600 Jr, the model of 2600 I had the most memories of as a boy, than later I would follow that up with a Sega Genesis, and eventually many other systems and games. My TV would eventually get changed out as well from a 19″ Polaroid TV, to a much more substantial 42″ Panasonic Plasma, bought down to my gameroom after it was replaced by a larger TV in the family room.

As 2015 arrived and the lease on our house was ending, we decided it was time to buy our next house, and by late January the house hunting began. Luckily for us, some pre-hunting in the fall put us through the ringers and helped us narrow our hunt considerably. Our final choice in houses lead us to a place that worked well for my family, but on the gameroom side not so much.

The bad news is that the basement of our new house is unfinished, the good news is that the basement on the new house is unfinished, but it’s also a huge English type with large windows. Can anyone say “barcade”? In all honesty though I know my work is cut out for me but in the meantime, who says we can’t have fun? My eldest son and I hooked the PS2, and surround sound up, over Columbus Day weekend and it sounded just like an arcade.

But, to my old gameroom I would like to say, Thank You! This room gave me the ability to add systems as I wanted, and always gave me a place to play the new games I bought. Memories of lost evenings down there and the many games played will linger with me for a long time. 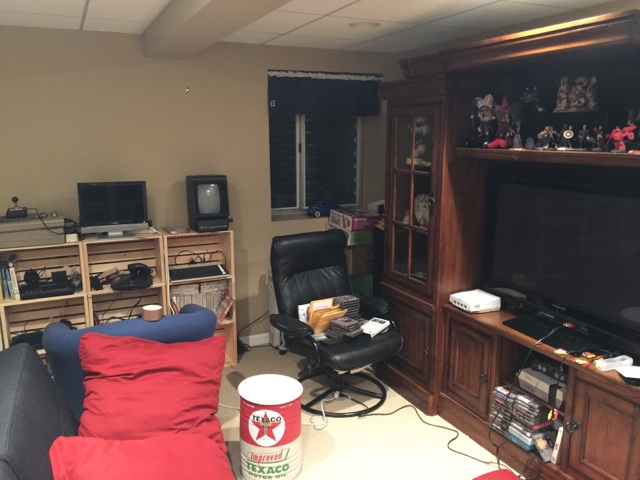