A Retro Look at Mobile Gaming

I recently wrote a post about mobile gaming changing the way we game. After giving it a lot of thought I decided I would like to take a look into why mobile gaming is so big and where it came from.

You see portable gaming has been around for a while with good examples dating back to the early 1980’s. But it was about 1990 when consumers began to take it seriously after the Game Boy. Since then we’ve seen numerous serious contenders fight it out in this market right up to today, with the 3DS, and PS Vita on the market.

At the same time though portable gaming has really started to see a new level contention come out of left field over the past decade. At the time of Nintendo’s original Game Boy cell phones where the size of bricks and weighed nearly as much, and only functioned as phones. By the early 2000’s the world would change. By the time of the Game Boy Advanced, cell phones and PDA’s (the first handheld computers) had began it slowly but surely merge. Cell phones began to have memory modules in them large enough to keep address books, calendars and organizers, and eventually even simple games.
I have no doubt that technology from the portable gaming industry was able to help spur advancement in phones on, and it wasn’t long till phones began to feature color displays which were common by 2001. Games on phones where still simple, until 2003 when Nokia would introduce the N-Gage. The N-Gage was a portable gaming system similar to the PSP, but unlike the PSP, the N-Gage was a fully functional cell phone and PDA. The N-Gage would play games on mini-cd’s, much like the PSP. 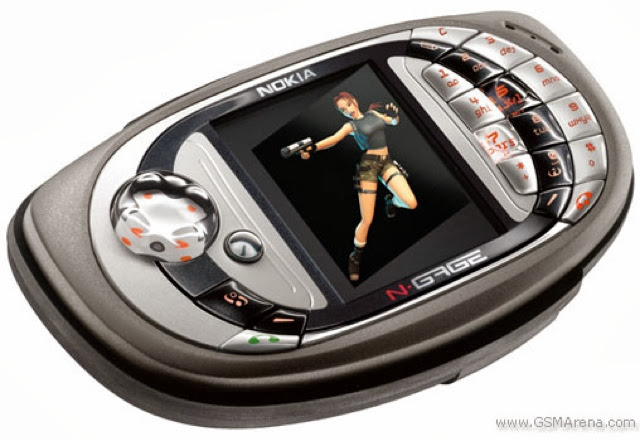 By now though PDA’s and cell phones where almost entirely merged and phones like Palm’s Treo’s existed side by side with the N-Gage. The Treo’s features touch screens using a stylus, had upgradable memory with an SD-Card, and had games that could be bought at a online store through the phone, and downloaded to it. Starting to sound familiar? To say the least neither the N-Gage, or the Treo exist anymore. I guess the N-Gage was either perhaps ahead of its time or no one saw the point.
Flash forward to 2008. Apple which had huge success with its iPod products, released the iPhone. The iPhone is a touch based telephone combined with a PDA, and iPod, or as they would soon be known smartphone. Initially (as with all iPhones to come) there were a lot of issues, up until the 3G series released about a year later, and we know the story from there. Hot on Apples heel’s cell phone giant Motorola developed the Android operating system, a knock off of iOS that’s more Windows friendly. Now with the iPad and Andriod tablets we know where it goes from there.
What wasn’t expected so much though was the rise of casual gaming these systems bought. Games originally designed to just waste 5 minutes here and there suddenly became a huge market segment. On top of that so did the proliferation of down loadable content DLC, otherwise know as that annoying reminder that for $0.99 you can download this, that, or the next thing that will take you to the next level.
For mid and hard core gamers DLC is often a huge turn off, since these types of gamers are use to just buying a game and earning levels and power-ups through play rather then buying them with real cash. To say the least it’s a line in the sand between casual gamers and mid/hard core gamers.
The video game industry also tends to see mobile casual gamers as a mainly female demographic. The basic idea on their part is that women tend to use and check there phone more than men so 5 minute time wasters suit them better than a 15 minute per level action packed epic. You can also see that the more popular games have somewhat effeminate touches as well, look at Candy Crush and Bejeweled for examples.
To say the least mobile gaming has changed the way we game and virtually came out of no where to do it. The big question that most real gamers ask is, will mobile gaming ever replace portable systems? Is there a point when Nintendo stops making 3DS, and Sony the PS Vita in order to become an app?
I have to say I have my doubts that real portable gaming is in any danger since iPhone and Androids lack game controls necessary for real and intense gameplay.