So as indicated last week the games are piling up again, especially for the PS1, but this weekend although tenuous, should have a bit of room to get into a few titles.
This Weeks Buys:
As previously indicated I’m trying to figure what direction I want to go in next with collecting, so it’s been a very light week.
Krazy Ivan (PS1) – This is another tall box title from back in the PS1’s early days, so as a tall box it’s a noted game, but outside of that it’s kind of obscure. Basically, it’s another take on the giant mech thing, but with an obvious Russian theme.
This Week Plays: 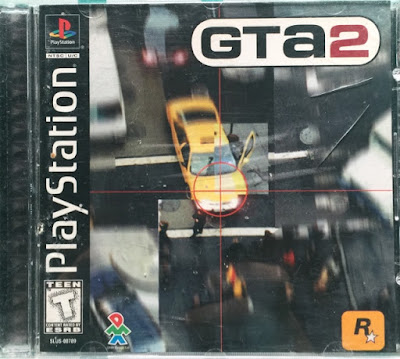 GTA 2 (PS1) ⭐️⭐️⭐️⭐️½ – I’m slowly making my way through the GTA series although I will admit I jump around a lot. GTA 2 as compared to GTA is definitely a lot more fun, and despite the isometric viewpoint, you can see how the third person of GTA 3 springboards off of this. This is actually a better game than Driver on the PS1, which I thought was better game than the original GTA. Graphics wise it’s about as much to look at as GTA or Driver, although is does have the slightly cartoony look of Dick Tracy on the NES. I think the more cartoony look might actually have been meant to give the game that tongue & cheek style the franchise is known for. Playwise it controls better than GTA, but played on the PS2 its only controlled via the D-pad, however I was able to pick up the game’s mechanics quickly. As far as originality this game has it in spades despite seeming like a clone of its first rendition.  Overall it’s fun as hell to play. 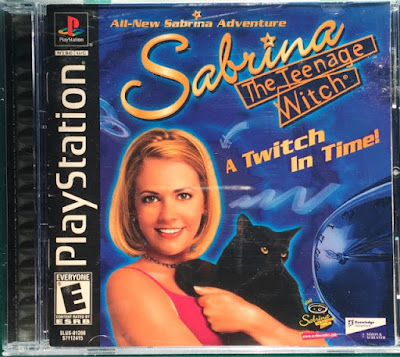 Sabrina the Teenage Witch: A Twitch in Time (PS1) ⭐️⭐️½ – I’m actually doing this game as part of my Game & Watches series so look for that in a couple weeks. Anyway, this is a colorful and upbeat little game as you would expect although it only features the voice of Nick Bakay as Salem, with someone else voicing Sabrina. Graphics wise it’s prisoner of its era and can be a bit hard on the eyes, although it’s pretty solid and hit detection is fairly functional.  I did find it a little hard to see what was going on, but perhaps with less glare on my TV it would be a little easier to see. Control wise it needs help with the camera views which never look where you want them to and leave you pretty vulnerable to enemies. As with most PS1 games played on the PS2, controls where on the D-pad which again is a struggle to get use to. The game itself stays pretty true to the comical world of Sabrina, but as for originality this looks like it might have borrowed off other games.  It’s an ok game but not one I’d suggest buying. 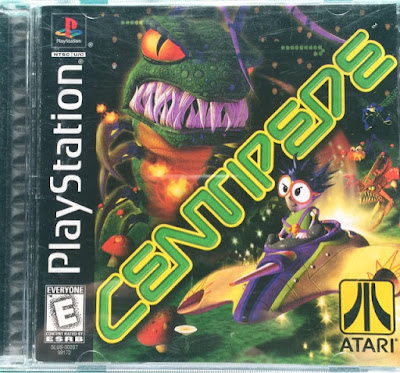 Centipede (PS1) ⭐️⭐️⭐️- Welcome back to the world of Hasbro reboots of Atari games, because dammit they owned the properties and they were going to use them. As with most of these games there’s an arcade mode or basically the original game, and an adventure mode which is the reboot. The arcade mode is of course good, as for the adventure mode it’s fun but also a bit dead-endish. Based on the adventure mode only, the graphics are on par and cartoony for one of these reboots, meaning their solid with good hit detection but nothing spectacular. Control wise the side to side motion had to be done with the R1 and L1 buttons which was a bit off putting considering fire was X, overall though once you got passed that it was ok to control. Originality wise it had some fun elements, and bought some imagination to the 2D world of Centipede. It’s another ok game but only pick it up if you want to experience these reboots. 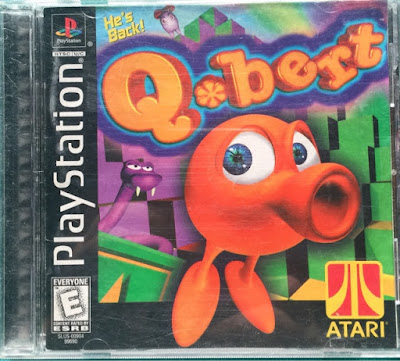 Q*bert (PS1) ⭐️⭐️- Yes, another Hasbro Atari reboot! I’m just going to say both classic (arcade) and adventure mode play terribly. Did you ever see the music video for “Groove is in the Heart” by Dee-Lite? That’s how this game looks graphically. I got the cartoony (my word of the day) look they were going for but…seriously. Anyway as mentioned the controls barely functioned on either mode. As far as originality it was there, and I could see the adventure mode was supposed to be like a puzzle game, which is a workable concept with Q*bert it’s just too bad the controls were terrible. 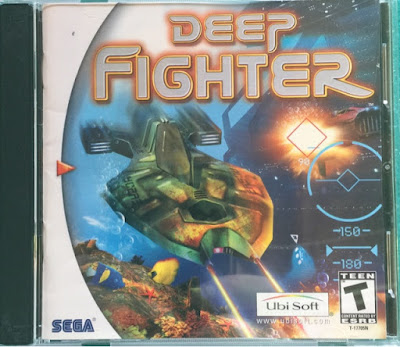 Deep Fighter (Dreamcast) ⭐️⭐️⭐️⭐️- Taking a PS1 break I’m moving to the Dreamcast for a game that has been on my wishlist for a while, Deep Fighter. Although the concept of underwater fighter subs was already toyed with in the 1994 Microprose title Subwar 2050, the concept hasn’t really been revisited much. So when I found out Ubisoft flirted with the concept on Dreamcast I had to take a look since I’m always looking for unique Dreamcast only titles. Graphically this one is pretty impressive, and even the FMV looks good. I found the gameplay graphics to be fairly clear looking, despite still have that distant fog limitation typical of games and systems of this generation, but it worked out well considering the underwater setting. The FMV was also clear, and dare I say it very movie like, which I wasn’t expecting. In gameplay I did find the graphics to be pretty solid, but hit detection, and even indication of it was a bit off which was a minor detractor from the game. A major detractor though was the controls, of course if you’ve read my plays on Dreamcast before or have even played on it yourself then you’ll know the Dreamcast controller is far from ideal, and at times painful to use. In this case the game would have benefited from a better controller. As far as originality the game has only a few similarities to the above mentioned Subwar 2050, whoever it’s very much an original in concept and overall gameplay, and somewhat imaginative in its overall story about the last human survivors building a ship to escape Earth. This tends to be a little pricier of a game, but I think the gameplay, concept, and graphics make it an essential for the Dreamcast. 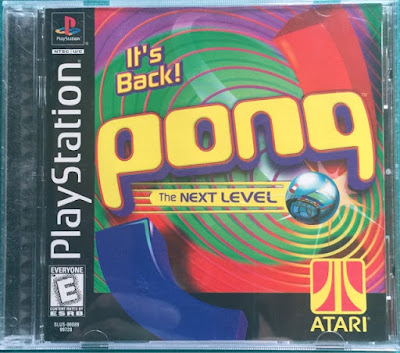 Pong (PS1)  ⭐️⭐️⭐️ –  Back to the PS1, and another Hasbro/Atari reboot. So basically this is still just Pong with some interesting backgrounds, center-field distractions, and with animations. It gets a little more complicated than traditional Pong with multi-balls, and opposing player helpers, but it’s still about blocking and hitting back the ball in play. Graphically, as you guessed again it’s cartoony, but looks well for what it’s trying to get across. Control wise, it Pong just moving up and down and it does it well. I will give this one big props for originality though, since it’s all about making the most of Pong. With that said though I still got bored and moved on from this game quickly since you can’t just play different levels but rather have to unlock them. 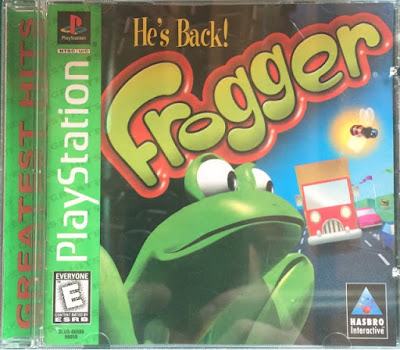 Frogger (PS1)   ⭐️⭐️⭐️- Frogger reboots are nothing new to me since I have some other crazy Frogger game on the GameCube. Now this game like Pong, which I mentioned above, has just the rebooted modes of play and lacks a classic mode. This one does pay tribute to the classic though on the first level which is a 3D re-imagining of the classic Frogger first level, and it’s actually pretty good. The rest of the four levels I had access to however, where challenging and sometimes confusing reboots. Graphics wise again, its good, and cartoony but nothing overly special. Control is also good, but simple, and there are no timing issues. Originality wise yes it’s pretty imaginative, but still a bit lacking. 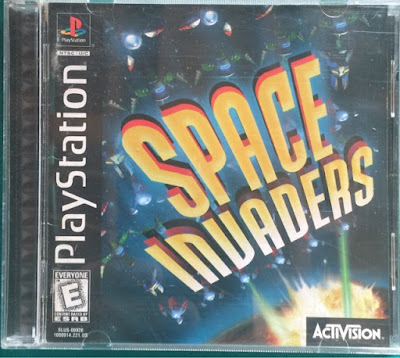 Space Invaders (PS1)   ⭐️⭐️⭐️⭐️- This is the first non-Hasbro/Atari reboot, but a reboot nonetheless and it starts off with a kickass intro. Now maybe it’s because this is an Activision thing but this one was good, I actually stuck with and played the first level all the way through. Graphically, it’s not bad, and on par with most PS1 games being solid and workable. Controls were a piece of cake and made sense. Originality wise I see where they were going and I liked, but still missed the original. This one rates a little higher in my book due to it being a joy to play. 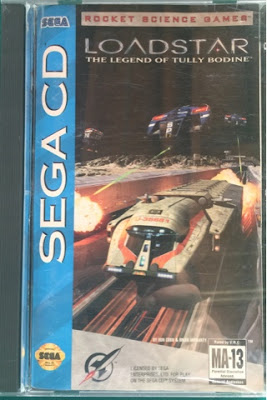 Loadstar: The Legend of Tully Bodine (Sega-CD)  ⭐️⭐️1/2 – Taking another PS1 break for the Sega-CD. Loadstar is a game about a space trucker with a truck that runs on tracks, but it’s a truck not a train,  got it? So it’s got lovely Sega-CD FMV goodness, and a ridiculous plot, but Ned Beaty’s in it (guess Homicide wasn’t paying enough back then). With all that said though once you get how to use this game works it’s somewhat entertaining. Graphically I never expect much from the Sega-CD, but considering this one looked pretty good for that system. Control wise it’s far from intuitive and even after playing it a while I still didn’t have it completely figured out. With that said though this is another game that felt as if it was supposed to have been a light gun shooter, but went a different direction for other reasons. Originality wise a space/truck rail shooter is pretty unique as is the gameplay. I’d recommend this one more for the collector though.

So nine games later, I think that’s been a pretty full weekend. I still have a few PS1 games out there including at some more reboots, and some actual good games, plus titles on a few other systems. Anyway I have a big, and probably stressful week ahead of me, and I can’t wait to get to Friday again. Have a good one!!!