So here we are well over a month since Christmas, and I’m just now discussing the records I got for Christmas. If your household is anything like mine though, the house remains in relative holiday upheaval until somewhere near mid-January. It’s by this time the decorations should be fully down and put away, and that you start to make some connection to were you left off on things before Thanksgiving arrived. To me this meant connecting back with some of my hobbies, including record collecting and the act of just listening to records. So what better place to start all that back up than with my vinyl Christmas presents.

This year I was lucky to get two vinyl items off my Amazon list. The first is Meghan Trainor’s Thank You on special edition duel colored 180g. The other was the special edition of Mumford & Sons Babel: The Singles, which is a special collection of the iconic Babel album broken down onto 45’s, in all honesty it’s only something a fan would collect.

A Brief Review of Thank You 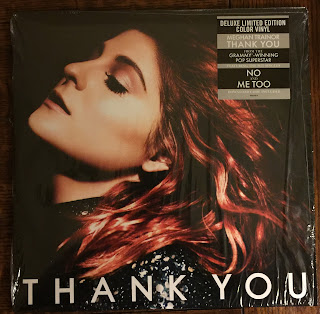 If you listened to Meghan Trainor’s debut album Title, then you’ll know she primarily went with a modernized doo-wop sound, much like her iconic It’s all About That Bass. Intermixed through the album were elements of genre’s such as a bit of modern pop and hip-hop like Bang Dem Sticks, a song destined to be one of the albums deep tracks. In Thank You Meghan Trainor not only choose to reinvent herself with her change to red hair from blond, but also decided to ditch the doo-wop sounds that made her so famous to begin with, and focus on pop and hip-hop elements. The first single to come out of her new sophomore album was NO which had a catchy modern beat and worked well at introducing Trainor’s overall new style.  Two months later Me Too was released, again another catchy pop song that served as a summer anthem in 2016.

Although a third single has yet really hit the top of the charts I will say other songs on the album, like Woman Up, and Champagne Problems have potential. Now, I could say that Trainor’s sophomore album is, like many sophomore attempts, proof that the sophomore slump exists with newer artist. In this case that’s hard to say since its not an apples to apples comparison between Title and Thank You. I will say that I was expecting to hear at least a little bit of Trainor’s signature doo-wop sound, but with that also said I will say that this is a pretty good pop album even if it hasn’t fully caught on. I can’t wait to hear what Ms. Trainor will be giving us on future albums. 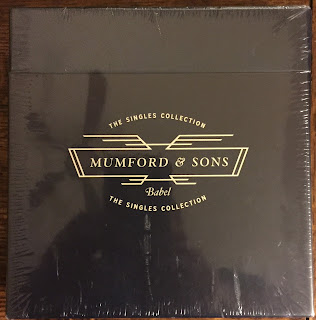 I actually already reviewed Babel a few years back when I got the 33′ for Christmas, you can find the review here. This as previously stated is definitely a fan based set. Here Babel is broken down into 45’s giving you that much more involved with the music feeling, that only 45’s can give you as you flip each over and switch them out on a single song level. Honestly speaking though if there is one album that needs a closer listening to its this one, since it’s such a well done and beautiful piece of musical artistry.

For me record collecting has always been a fairly casual pursuit in the way of a hobby. Of course that’s just me, and I know that there are some folks out there who take all of this very seriously, and that’s their prerogative. I guess I have more of a relaxed outlook on it, since I’ve been part of a generation that has the ability to carry it’s favorite music everywhere. This especially includes those not so relaxed places like work, in the car during traffic jam, or even while working out. CD’s, electronic formats, and even tape cassettes have in many ways made the past 30 years about hearing music, but not “hearing the music”. So the return to records has presented me with the ability to stop and listen to music in a setting that is more conducive to actually hearing and appreciating the music more. This is also one of the reasons I now purchase most of my new music (like the above) on vinyl, with the added bonus of the electronic download element.

The interesting part about the return to vinyl, is that it’s had some interesting repercussions on other music mediums recently. A few years ago I wrote and article on this blog called To Old Tech, or Not To Old Tech about how I’ve debated making a multiple CD player, and duel tape deck part of my listening room. At the time, now three and a half years ago, I wondered when this old tech would receive the attention that records were starting to receive at that time, as it turns out for cassettes that time is now. On my facebook page for this blog, I posted an article a few weeks back about the surprise increase in demand for cassettes in 2016, or as the article would state a 74% increase between 2015 and 16′. It sounds very impressive but demand for new recorded music cassettes in actually quantities went from 74,000 in 2015 to 129,000 in 2016. Not super impressive when you look at it that way, but this is also where vinyl started a few years back.

So what does all this have to do with 2017 for me? Well perhaps it’s too late to make a New Years Resolution for collecting in 2017, but there are a few things I would like to attempt to do before this year ends;

My overall objective is to keep this a relaxed hobby that I enjoy, and love to share.