It’s Monday April 16th, it’s 8:30 at night and it’s been 27.5 hours since MGC 2018 ended. I was lucky enough to stay all the way till it’s official end at 5PM yesterday, but only thanks in part to an ice storm and blizzard trapping me in Milwaukee and unexpected third night. 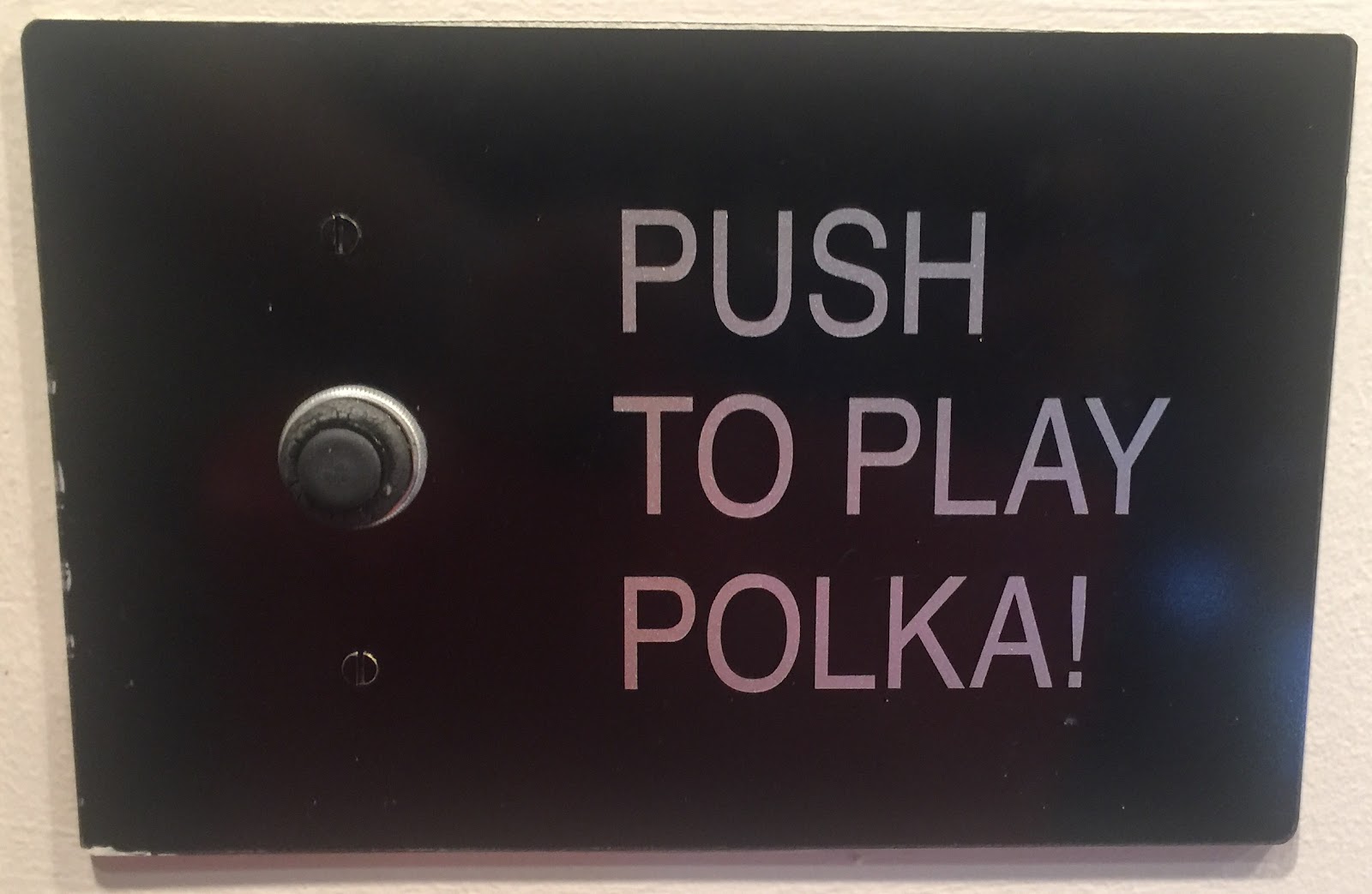 As 5PM approached it was interesting to see pinball and arcade machines being hauled out, and vendors shutting down and clearing off their tables. There was a sad finality to it all, with a hint of catharsis as it all came to a cold end as winter storm breezes blew into the massive spaces of convention from the open loading bays. I spent

the next four hours watching the loading bays from my hotel room as truck after truck pulled up to retrieve their precious cargos of arcade and pinball machines, even the huge hauler that not doubt supported Stern Pinballs full blown display.

Unlike my visit two years ago I didn’t buy any games at MGC this year, nor more importantly did I buy another pinball machine. Gaming wise the only thing I did buy was an Intellivision console, which unlike my last I’m hoping is working. My main goal was to find a Colecovision this year but sadly that didn’t work out, as there where very few at this years show and were either too expensive or in questionable condition. 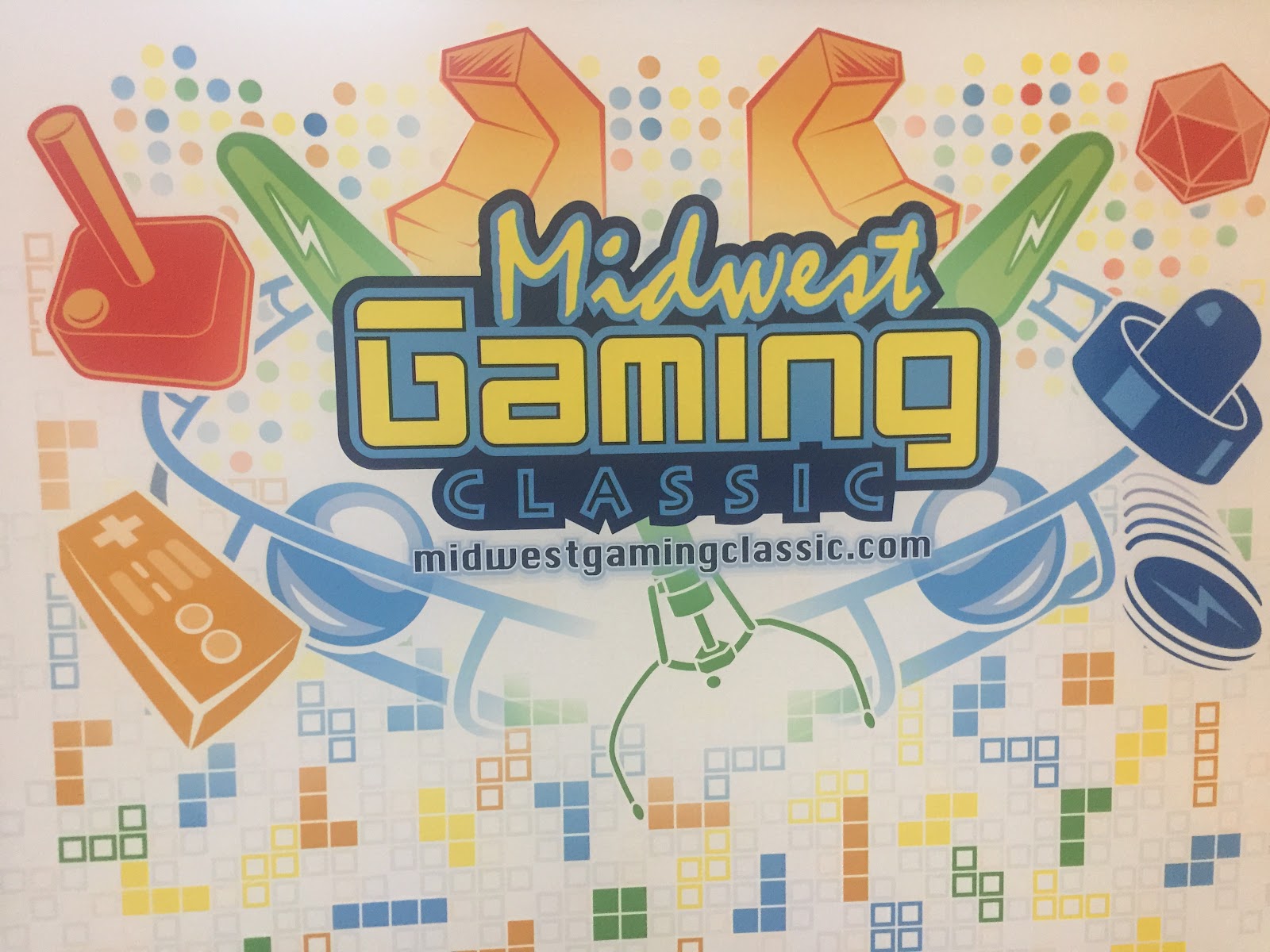 With all that said though the true story this year was the change of venue. MGC’s move to downtown Milwaukee’s, Wisconsin Center, is a huge jump from its confining former venue at the Brookfield Sheridan where it had been held since 2004 and was splitting its seams when I visited last in 2016. For Midwest Gaming Classics the Wisconsin Center was a true game changer, no pun intended. Not only is the space better for the annual convention, but expands possibilities for the show in coming years.

With it now over though the big question is, was the 2018 MGC as much as a success as past years or has the change of venue changed the annual retro gaming convention irrevocably? Before the 2107 show even drew to a close, discussions on the shows future and new space were taking place and it was obvious a new venue would be necessary. Immediately following the 2017 show, the hunt for a new venue was on, but it was only about a month or so later that the Wisconsin Center was named, at least for the 2018 show. Of course news of MGC’s future following the 2018 show hasn’t exactly come out yet, so as of yet we are a little unsure whether the Wisconsin Center will be the shows new home. Of course following the hunt for a new venue after last years show, many speculated that the show may end up across the stateline at Illinois and the midwest convention mecca of Rosemont. I don’t think it we will see that anytime soon, but it’s fun to imagine MGC growing into an event that requires Rosemont, or even Chicago’s McCormick Place.

From my humble point of view what I can say is that compared to the 2016 MGC, the space of the Wisconsin Center was nice to have. In 2016 whether it was viewing an exhibit, playing pinball or arcade games, or even stopping off at vendors, the old Sheridan space felt more like a sardine can than anything else. Considering it was a chilly mid-April day as well, someone not staying at the Sheridan themselves would have to managed the tight confined spaces while either wearing or carrying a jacket with, and considering how hard it was come into and leave the convention might have to negotiate carrying packages with as well from anything bought at the vendor area. I’m not going to say we as a family didn’t have good time, but the uncomfortable conditions did cut down on how long we could stay. By 3 in the afternoon or so we felt exhausted from fighting against the continual flow of humanity, and the unbearable heat and humidity from so many bodies packed into such tight spaces. I was really glad I didn’t buy a weekend pass that time, since I don’t think we would have come back the next day after our experience on that Saturday.  At the same time though it was hard to miss much of anything in the old venue, since special speakers and live podcast recordings like that of the annually featured Retronuats where in the conference centers midway a cafe and bar, which you had to pass to get from one end of the venue to the other. So what you want about smaller spaces but they do tend to force the sense of community a little more.

Now, on to 2018 and the Wisconsin Center. I’m going to say one thing really quick to get off my chest as it may have affected my judgement on the subject.This year I was lucky enough to stay in one of the hotels adjoining the Wisconsin Center, ironically I stayed in this same hotel two years ago for MGC 2016 still having to drive out to Brookfield, WI. The ability to stay close does make a huge difference especially with family in tow, since it gives one a quick escape to some rest time between visits, the ability to dump off purchases from the vendor area in a safe place, and more importantly no jacket to carry with. Being able to take an hour or so respite in a quiet of the hotel room does make a huge difference in the middle of the convention day and does help recharge ones personal battery, a decide where to concentrate the rest of the day on. The close stay also allowed me to take full advantage of the day staying till nearly the official end of the day on both days. Of course than again this might also be a big positive for the Wisconsin Center venue as well, since two hotels are attached via skyways, and several others within less than a two block walk. As opposed to Brookfield that only featured the Sheridan, and a few smaller hotels but not in such close proximity. To say the least though being able to go to and from MGC without the need to wear a jacket for two days was extremely nice.

If you’ve attended MCG before than you are probably aware of the fact that most of the activities tend to take place in two main rooms, the Arcade area and the Vendor area, with a third smaller area for the gaming museum and other ancillary areas for various arcades, special vendors, and special activity rooms. As you can guess much like in the past the arcade room, as it has in the past, was the busiest place at MGC this year interestingly hosting more pinball machines than arcade machines this year. The area also hosted the gaming museum this year as well, which is a collection of home consoles and computers from gaming’s past, and was usually located in a different room in previous years. Another highlight of the area was a place I unwittingly spent a lot of time in, this being the kiddie ride area, which consisted of a collection of coin operated kiddie rides like you’d see in front of a grocery store, my youngest son fell in love with this spot and was trying to convince me to buy a $2500 Batmobile for him. The area also hosted various pinball machine companies (a big shout out to the American Pinball guys and their Houdini Pinball machine, thanks for the T-shirt), like American Pinball with their Houdini setup, and Stern with their massive setup dedicated to their new rock band machines, as well as the Garcade family arcade with their assortment of classic machines, and Cosmotron introducing their new game demo. The space also featured an air hockey table area, and some other miscellaneous things such as large inflatable screens with various console play on them throughout the weekend. Of course last but certainly not least this was also the area in which the annual pinball tournament took place, which my wife actually competed in this year. 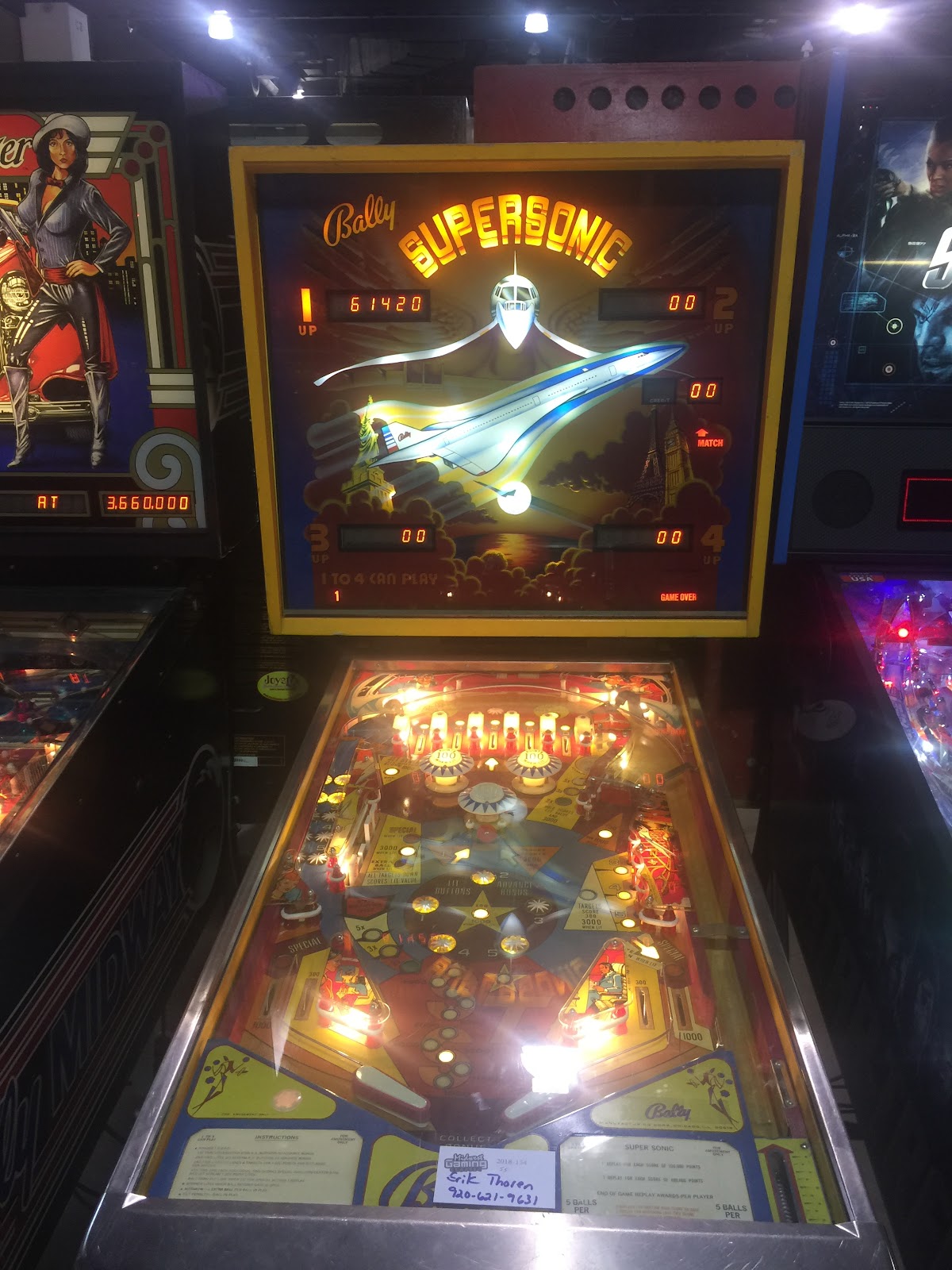 For the arcade room I could say that compared to past years it was far easier to get around it this year, and unlike our last MGC we were actually able to explore the whole room and get used to navigating it with ease regularly. With that said though there were times when the room was pretty crowded, and certain areas could bottleneck and become impassable. My only true complaint is that pinball machines seemed to out number arcade machines at a pretty high ratio, and next year I hope we see a 50/50 split between the machines.

Next we have the vendor area. It was no longer the crowded cramped space that had you check for you wallet every thirty seconds as in the past, but fairly wide open and as deep of a space as the arcade area. The back of the room featured additional food vendors, and eating area and of course that music area we have gotten use to seeing at MGC playing game based music. Like the vendor area in the past in also featured a large area for board gaming, and a variety of games to borrow and play. I loved the wide open areas on the vendor area this year, but I will say I didn’t seem as if there were as many vendors. Of course that observation could have been illusion on my part due to the space. 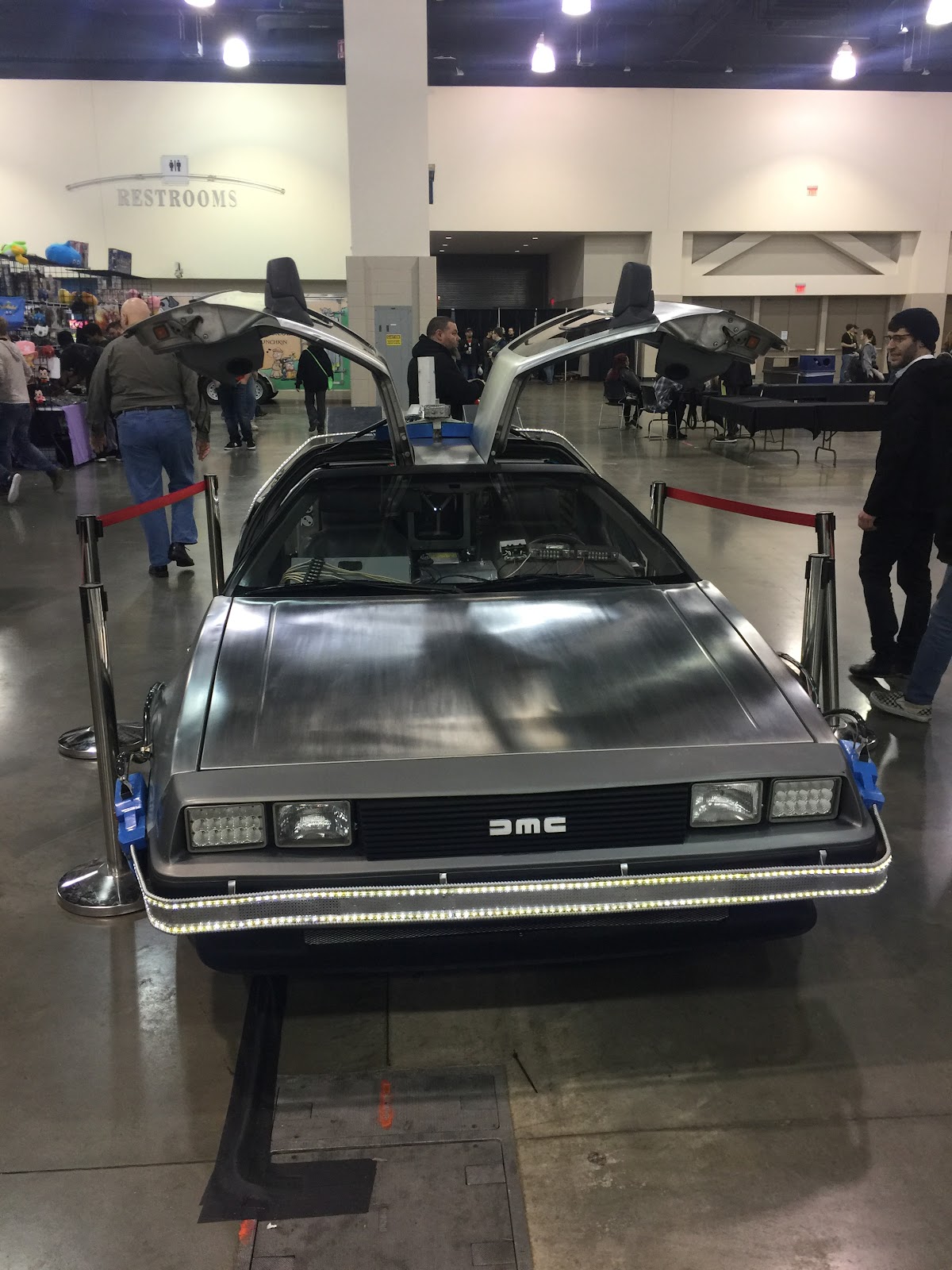 Outside the vendor hall there were additional sellers as well as a large sitting area for additional gaming and eating, but the rest of MGC was one floor below. One the second floor we had a selections of rooms that themselves where crammed into smaller rooms in previous years. This included spaces for private arcades like Galloping Ghost which was huge this year, presentations rooms for special speakers and live podcasts, parts vendors, my new friends and Guys, Games, and Beer with their rec room setup and standup Vectrex arcade machines, and last but not least one of my favorite rooms at MGC the Steel Battalion room. The space for these rooms was nice, and had I had time to see a presentation or the Retronuats recording live this year the large rooms with ample seating would have been nice to go to, rather then standing room only at the old Sheridan. One of the big issues here though is that you would only know about these presentations if you checked the schedule since no other announcement was made.

Whether MGC had stayed at the Sheridan or had moved anywhere else there would of course be both benefits and caveats. In this case I think we are seeing far more benefits from the move than some of the caveat. Of course any move will have a learning curve, and no doubt MGC’s organizers are going to take notes from this years show and begin adapting the show to the new found space taking into account the new found capabilities and limitations of moving to such a large space after splitting its seams at the old Sheridan. I would personally call the show a huge success. Just one thing MGC organizers, can you speedpass those of us who bought prepaid tickets?

Anyway, I’m only trying to do MGC every other year so unless there is some huge attraction at next year’s show that’s a must see I probably won’t be back till 2020. So if the show is still at the Wisconsin Center then, it will be interesting to see what changes where made, and what new things they may have added.