When it comes to video games, Star Trek has been a favorite subject of programmers and gamers for years. The first Star Trek games appeared in the form of text adventures shared between hobby computer enthusiasts as far back as 1971 and since then Star Trek games have appeared on multiple systems and in multiple forms. Games have ranged from the afore mentioned text adventures, to arcade space shooters, ship combat simulators, FPS’s, MMO’s, and many other genres. Some of these games have been really good, some mediocre, and others absolutely dreadful, but no matter the quality they are still integral to the fan based experience, and bring us one step closer to our beloved franchise.
In this series Trekking Through Games I will be discussing and reviewing many of the Star Trek game titles that have appeared over the years. Due to the sheer number of Star Trek titles however, I will not be presenting the games chronologically, so there will be a level of randomness to the release dates and platforms these games are presented on.
Star Trek: Trexels   – iOS 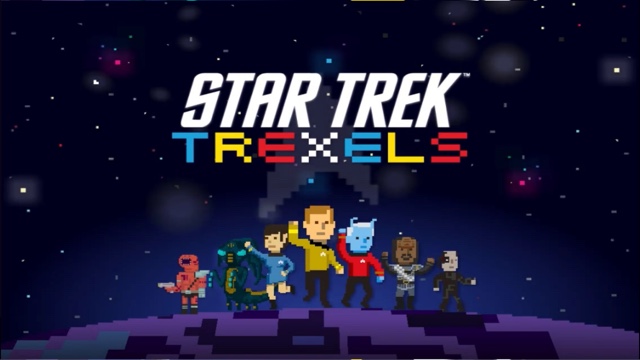 Star Trek: Trexels is an app available on iOS, and at this time and date it’s one of the most current Star Trek adventure games you can get. The game is officially licensed, and it’s what is commonly dubbed as a “play to win DLC”. In spite of that, the game actually presents a number opportunities within game play to gather the proper resources to play and succeed. For being what it is it’s actually a great little game, fulfilling to Star Trek fans, while remaining quirky enough in its 8-bit style to be considered fun by those unfamiliar with Star Trek.
The Fan Experience:
As a Star Trek fan returning to the series after many years I’ve actually found that this game provides a great deal fan service where need be for most of the series and movies, except Enterprise and DS9,  although Quark does appear daily to offer you extra points and whatnot by watching ads. Don’t ask me why DS9 and Enterprise aren’t included, considering it had some pretty bad ass characters like Sisko, Kira, and Archer, but with the characters it does have it works pretty well.
The Plot:
Star Trek: Trexels takes place in the non-canonical Trexelian Expanse. Following the destruction of the U.S.S. Valiant by an alien race known as the “Progenators” (a generic race rarely referred to in any of the series) and it’s your job as a Starfleet Admiral to take a 23rd Century Constitution Class warship to investigate the Valiants disappearance, and learn more about the Progenator threat.
Gameplay:
Gameplay revolves around building and upgrading your ship, so as to generate resources by which you can further explore each sector. Resources are divided into four categories; Command, Research, Power, and Dilithium. The first three can be gained by building and upgrading rooms that can generate these points through normal ship operations. The last Dilithium can be earned through leveling up, completing certain assigned tasks, or by hunting crystals down in a simple space shooter mini-game. 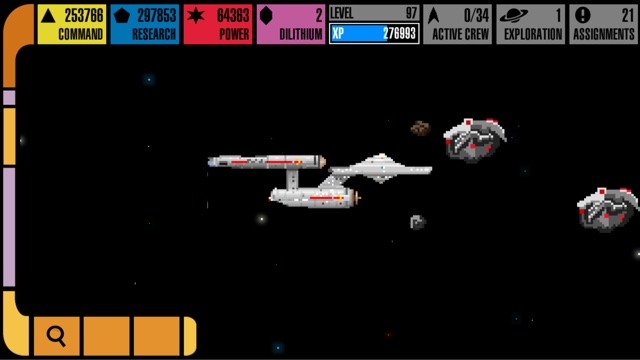 The mini-game is slow and would be a horrible game on its own, but shooting space debris can yield resources you need. This is also my 12 year old sons favorite part of the games, and its thanks to him I found it.

Dilithium Crystals are also the medium of exchange in the game. Or to put it another way you can choose to spend real money on buying them outright, then convert them into other resources, or purchase additional officers, and other premium upgrades.
The game presents 11 sectors to explore, each of which reveals something about the Progenitor plot line. Each sector consist of 7 space based objects for you to explore, like planets, asteroids, abandoned starships, and so on. Each one of these objects presents different and multiple sets of challenges. You’ll see Away Team missions, ship to ship combat, on ship challenges, and individual officer challenges as part of the normal mix.
Each challenge requires your officers to use either; combat, diplomacy, engineering or science skills. Each officer has a different mix of these skills, and all these skills can be upgraded in your officers using the Starfleet Academy room(s) available for you to build. The higher the skills the easier the missions, and likelihood for success.
Away team, ship to ship combat, and on ship challenges all present you with similar game play. For engineering, science and diplomacy missions you must gather random skill blocks in less the 45 seconds or before the situation deteriorates to win the mission. For combat, both combat and science blocks are tossed on screen for collection, collecting red combat blocks allows you to charge your phasers and shoot enemies (personnel or ships), while blue science blocks allow you to heal your own people injured in combat. The higher your enemies, or task skill levels the harder these missions become. If you are evenly matched or just completely out matched you can choose to buy extra skill bricks in missions at the rate of 2 Dilithium crystals per use, and sometimes the extra 5 to 10 bricks can really make a difference.
Then there are your officer challenges, these can occur with an individual officer or with a group. For the individual challenges a pre-selected officer on your ship will spend a certain amount of time (15-20 minutes) in a particular area on the ship researching a dilemma related to an object you are exploring. These missions aren’t particularly hard and only require some waiting, but they are a hit to your overall resource points. The group missions on the other hand are a little different, since they require you to pick officers in your reserves to go on missions. The group missions have two metrics; Success, and Danger each of which shows as a percentage. Each of your available reserve officers will have two numbers assigned to them, one a green success number and the other a red danger number. Be warned though some success numbers can be negative, which will lower your chance of success if those officers are used. Group missions can range from 1 to 3 hours long, and require the player to do nothing but wait for the officers to return either successfully or unsuccessfully.
As the missions draw to a successful close you will eventually complete the space object and move on, with the goal to be to complete all objects in the sector and move on to the next.
Review of Gameplay
A couple things that you need to keep in mind is that first of all my gameplay description hardly does this game justice, and secondly this is meant to be a casual mobile game. Sure this isn’t Star Trek: Legacy on the Xbox360, or  Star Trek: 25th Anniversary on the NES, but I still think its a fun little game and a pretty addictive one at that. For a casual game its still very challenging, with aspects of managing resources, crew, officer assignments, and ship layouts in addition to the various types of missions mentioned above with regards to exploration. To be honest I haven’t spent this much time invested in a mobile game since Angry Birds years ago.
Well, I hope you enjoyed this premier review for my newest gaming series. Please feel free to give me any feedback you have on this or other Trek games.