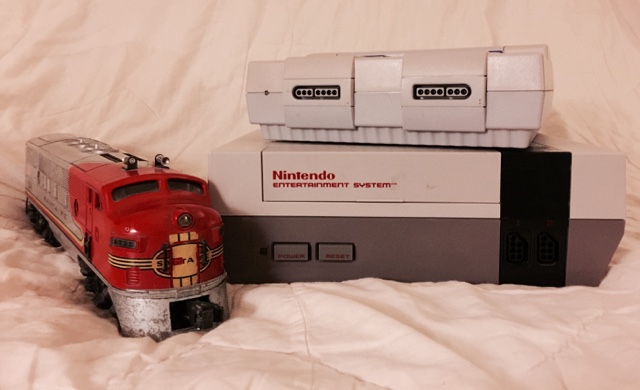 Classic Lionel Santa Fe F3 with the NES and SNES

When it comes to the classic video game market we’re currently experiencing, I suddenly find myself having déjà vu. I guess this is because I’m in the very unique position of both currently being and having been into two nostalgia based collectors markets that are experiencing the exact same conditions, but nearly 30 years apart.

My back story, and one that I’ve shared before, is that I’m a long time collector of O gauge electric trains. If your unfamiliar with electric trains, O gauge is basically what Lionel makes, if that helps clarify it for you. If not and that name doesn’t mean anything to you, than let me just tell you that as electric trains go these tend to be mid-sized electric trains, with large sized price tags. I started with my first set when I was about three years old, and have collected ever since, although much less in recent years. In the early 80’s electric trains especially Lionel’s where easy to come by and still inexpensive, people sold them at garage sales, in classified ads, and even resale shops. But by the late 80’s things changed, and suddenly something that may seem very familiar to all of you in the retro video game community, happened. Train sets that you could buy for $25 a set at garage sales, now went for $200 and where only sold in hobby shops, or perhaps at train shows for a little cheaper. People who never owned an electric train in their life, where suddenly snapping them up as “investments” and prices began to get out of control as supply (in a real or perceived sense) dwindled. Something that was formally a kids toy, suddenly became nearly as precious as gold, and kids like myself at the time, could barely afford to keep it as a hobby. Does this sound familiar to you yet?

Believe it or not the hobby of classic electric trains and classic video game collecting really aren’t as different as you think. Both hobbies are based on kids toys, both hobbies have “generations” in which the toys advanced both technically and in construction, both are about expansion (i.e. rolling stock for the trains, and games for the consoles), both start off with basic sets, and both are always worth more in original packaging. But, there’s one more key thing that makes these two hobbies alike more then anything else, and that’s a generation of people. You see 30 years ago the electric train market went nuts for one reason, and that was that a lot of the “Baby-Boomers” had suddenly “arrived” in their lives. Being in their late 30’s through early 40’s, a lot of them where mid-career, had children in their pre-teen or teenage years, owned their own homes, and they had disposable income. They had reached an age where they wanted to recapture some of their childhoods, perhaps to “share with the kids”, and many of them now had the ability to buy those electric trains they always wanted as kids. Once again does this sound familiar yet?

So here we are now, we late Gen-Xer’s and early Millennials in our late 30’s and early 40’s looking at a video game market that has skyrocketing prices, and is being taken over by folks “investing” in retro-games. We keep asking why prices have shot up so much, and how a copy of Super-Metroid, that was $20 loose a few years ago, is now selling for $50+. What we’re failing to realize though is that we, as a generation, have “arrived” ourselves. Now we’re the ones with the income and ability, and we can own both an SNES, and Sega Genesis like we wanted to as kids, or to get those long lost Gameboy games that eluded us on our paperboy and lawn mowing salaries as 12 year olds. With this realization of many our age, the glut of games available at resale shops, and garage sales for next to nothing a few years ago have disappeared, and that $5 boxed copy of Goldeneye you spotted at a church rummage sale 4 years ago, is now selling for $50 on eBay.

Yes, it sucks that the prices are going up, and in a way you feel like your being priced out of a cool hobby and childhood memories. At the same time though there is a bit of a testament to the hobbies significance through this, like the fact that these games had meaning to many people, a meaning that is filled to the brim with great memories, and nostalgia. Or how about the fact that we, the enthusiasts, have made such a positive impression with our passion for the hobby, that we’ve inspired others to join in. I will agree that perhaps there are those looking to make a quick buck on all of this, all you really need to do is look at the Retro VGS fiasco, price gouging on eBay, or even the prices in some antique shops, and pawn shops to see all that, but for the most part though I believe the hobby is healthy and blooming.

So what does history teach us about the future of retro gaming?

Here’s what happened in the world of electric trains. Like our own hobby, electric train producers still exist and come out with new stuff all the time. A finely detailed Lionel steam engine with a mind blowing array of electronics on-board can easily set you back about $2000 brand new, and something as simple as a boxcar about $90. So yes, even at its worst retro-gaming is still cheaper, but I digress. The old stuff, which was in high demand in the late-80’s, began to decline in price as the new stuff became more detailed and realistic. Prices of the old stuff never fell back to their early-80’s prices, but they’re more at equilibrium now, especially for old stuff in good shape. In a way this is where the electric train market and retro video game market diverge. The advances in technology and realism in electric trains was unexpected, while advances in video gaming technology are always expected. So the ability for a new generation to suddenly upstage the old in video gaming, seems unlikely since we take the advancements for granted. Look at gen 7 systems like the XBox 360 or PS3 and the price of those respective systems games now, many including some true classics range from $5-$10 each on eBay. What I honestly believe we can expect is for the bubble to move progressively from one generation of consoles to the next, as people age into the appropriate mix of disposable income and nostalgia for that generation of console. Right now that is between 5th and 6th generation systems, with a great deal of lingering on the 4th generation of systems as well. In many ways when we compare electric trains and video games it reminds me of the way the generation known as Post-War (World War 2) electric trains, had its decade based sub-generations and the way in which 1950’s and 60’s trains grew into popularity with its aged in groups, while the 1940’s classics seemed to stay evergreen. Once the bubble moved for trains, or for gaming will move, I believe like trains we should see a more study equilibrium for game prices in its wake, especially as a lot of speculators, and price gougers leave the market for these generations, and free up stock to be sold at more realistic pricing.

A decade from now when we will most definitely call the PS2, and first XBox, retro I have no doubt that we will see the preceding generations in aftermath mode with prices higher then there where a decade ago, but still lower than they are now. Until then, we just need to enjoy what we have collected cheaply, and just remember that the bubble will eventually pop.