“It’s a really great game, do you have it in your collection?”
“Yes I do” he says with hesitation, “And from the 60 seconds of it I played, it does seem like a really great game!”
“60 seconds?”, his friend said quizzically with eyebrows raised, “Only 60 seconds did something happen to your machine did it break? Did the game go bad?”
“No! “, he settled in for the long explanation, “It’s just that….well… you see it came to me in the mail with a bunch of other games I got off eBay. Well, I was in such a rush to try them all, to make sure they work and get that seller back his feedback, that I only had a minute or so to play and then it went right into my cabinet”.
Be honest with me my retro-gaming companions, does this sound like you?
Well it’s certainly me! After collecting for multiple systems for the past eight months I realized there are some pretty great games in my collection that I have only played once and briefly, since buying them. To be honest as I bring new games in it some times takes a few weeks before I can even get to play them, which has been a minor irritation to some eBays sellers who e-mail me as to whether I got the game, and/or why I haven’t left feedback. 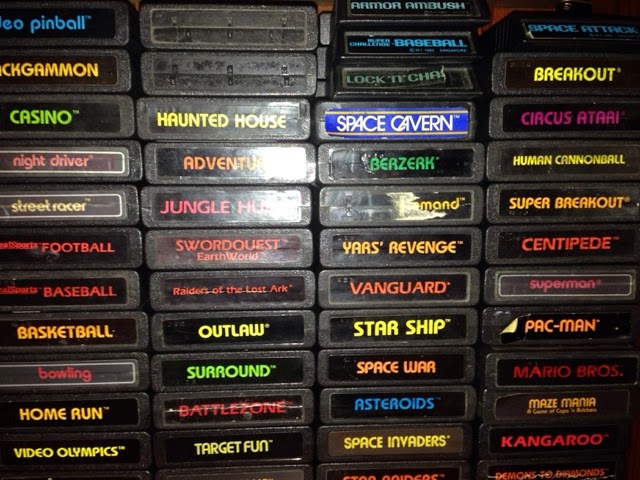 So I’ve begun to realize that for the moment I’m more of a collector then a player, which for me is uncomfortable territory. You see I have a strong background in another hobby, model railroading specifically O-gauge. Here there is a great deal of animosity between collectors, and those who are operator collectors. Buying a model train just to put on a shelf is almost considered blasphemy by an operator collector, while a collector is shocked that an operator collector would dare even run a $2500 precision scale steam locomotive (even though that’s what your suppose to do with them). So with games piling up on a shelf being more displayed then played, I have a level of operating collector guilt from my background.

But as a video game collector operating multiple platforms it’s hard not to be intrigued by an interesting game you hear. That leads to tracking it down and buying it, especially when it’s $10 or less (usually $5 or less) on eBay, or at a gaming store or thrift shop. So it’s hard not to stack games up, due to the relatively inexpensive nature of the hobby. At the same time though, you know your going to be to busy making sure those new games work. Which leads to not revisiting, and therefore playing through some of your older ones because of it. Yikes, what a Catch 22.
So it all comes down to the title of this article “Stop Collecting, and Start Playing”, since it’s the only way to really dig into, and get to know some of the games you have in you collection. Will I actually do that though? Well I guess time will tell.
What about you? Is this a issue for you as well?