If you’ve read my blog before then you’ll know that I’m the proud owner of a Sega Genesis, and that I was outright floored the first time I ever played Sonic the Hedgehog and saw just what the Genesis and its 16-bit graphics could do. Outside of the Genesis though, Sega and its systems have always been somewhat alien to me. I had heard of the Saturn and knew it was a Sega product, and I had heard of the Dreamcast and knew very little about it let alone it was a Sega product. Then there where the terms Master System, and Megadrive that always threw me for a loop since both names conjured up images of PC-console hybrids like that of the early Famicom with is disk drive. As time has passed though I quickly learned that the Megadrive was what the rest of the world outside of North America, called the Genesis, the Master System on the other hand would elude me for a little longer though. Then one day I decided to research the unit and an image of it, and suddenly the formally alien system seemed familiar to me as a memory suddenly popped in my head of seeing the sleek black system on display at a Toys R’Us many years ago. 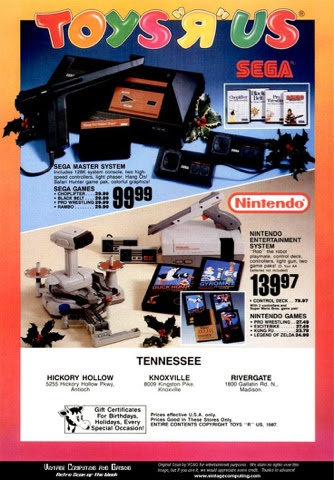 For us here in the United States and North America there was probably no console more iconic than the Nintendo Entertainment System the “NES” for short. Everything about it shouts classic from its gray cartridges with the finger notches, to the toaster way of loading games, to the power and reset buttons, to those beautiful d-pad controllers. The NES and the image of it, speak volumes about the gaming experiences of a generation, and the new found interest in home gaming consoles the system would spark.Some experts believe the NES won Gen 3 gaming hands down by capturing anywhere from 80-89% of market-share in North America, with the Atari 7800, and Sega Master System falling to a low selling second and third place respectively. To be honest, anybody who lived back then can find those numbers easy to believe. Nintendo was everywhere like TV, Movies, and even cereal boxes. But the reality is that on the world stage the NES may not have been the hands down winner we thought it was.

The Sega Master System was the hands down winner of 3rd generation console gaming in Europe and many other parts of the world, and very conceivably the winner of Gen 3, period. For a kid like myself with a background of Atari and Nintendo, the name Sega wouldn’t come into mind until the great Sega Genesis of the 16-bit era. From there on out the name Sega would be synonymous with Sonic the Hedgehog, and “Doing what Nintendon’t!”. The fact of the matter is though, that I and others like me, had no concept of the fact that Sega had been competing with Nintendo long before the SNES.

The Master System would hit North American shores until 1986, a full year after the NES. Despite its sleek high tech stealth jet like design, and slightly improved graphics, the year lag had caused the system to be no more than a blip on the radar for many North American gamers. Those who had the system, loved it, but the NES was taking hold and would stir into a frenzy by 1987-88 with Nintendo Mania. So with the door almost closed on them in North America, Sega moved towards releasing the Master System in Europe a year later in 1987, and in Brazil in 1989. The smaller European market was highly receptive, since console systems bringing arcade games into the home where still somewhat foreign since Europe was heavy in to computer gaming at that time with systems like the ZX-Spectrum, and Amiga. Since Nintendo seemed to concentrate more on the far wealthier and larger North American and Japanese market, Europe was ripe and ready for the taking. The Master System caught on like wildfire, cementing Europe as a Sega stronghold for years to come.

In 1989 Sega was able to get the Master System into Brazil, a notoriously tough market to enter due to government restrictions on imported items. To help ease import issues Sega licensed production of the Master System to a Brazilian firm, which although risky, would prove to be a highly strategic move on Sega’s part. It would quickly make the Master System, and subsequently the Megadrive, Brazil’s most readily available and therefore favorite video gaming consoles. This would make the Master System in Brazil, what the NES was here in North America, garnering huge market share for years to follow. The longevity in production and sales of both systems wouldn’t be challenged until Sony would license production of the PS2 in Brazil nearly 2 decades later in 2009.

In today’s world long after the era of the NES, Master System, and Atari 7800, all three systems are making a resurgence in popularity among collectors and devotees. Although the NES has always been a favorite, a new light is being shined on the 7800 and Master System by those who loved these systems when they were new. So after a great deal about the Master System, I decided it was time to give the Master System a try and add it to my collection.
In part 2, I will give my reaction to the Master System as I play my newly acquired console. Will I love it? Will I hate it? I guess we’ll find out.