Defining 8-bit: Part 1 – A Journey into Nostalgia and Perception

About a two years ago I was having a conversation with a hardcore Atari 2600 fan regarding a particular game we both liked, and that had both an Atari 2600 port and NES port. In the conversation I had made some comment about how that particular Atari 2600 game was good, but looked better in 8-bit, alá the NES. As I said that he stopped to correct me (very nicely I might add) saying that although he knew what I meant about 8-bit and the NES, that Atari 2600 games where 8-bit too. At first I was taken back by that thought, I knew that Atari had programmed many of their games using 8-bit computers like their own Atari 400 and 800, but I never made the direct connection to Atari 2600 games being 8-bit. In my mind when comparing the offerings of the Atari 2600, to the NES it’s easy to lose sight of the fact that the 2600 was 8-bit too.
Even though both the Atari 2600 and the NES are 8-bit, it isn’t an illusion that what you are seeing looks worlds apart. The fact of the matter is that this has very little to do with the graphical limitations of 8-bit, and more to do with the hardware itself. The NES as well as the other systems of the 3rd generation had hardware that was exponentially more powerful than those of early gen 2 systems like the Atari 2600. In one of my previous articles “A Bit of an Issue”  I talked about the part Moore’s Law played in this and how the hardware of 1983’s Famicon (the NES’s forerunner) would have been anywhere between 16 and 64 times more powerful then what would have been on the 1977 Atari 2600. This would mean that the NES was not only an overall more powerful system do to its updated microprocessor and on-board memory, but game carts of the era would have benefited as well by being able to hold significantly larger programs that increased both the quantity and quality of game play. Despite all this though, game programmers still went about developing games for 8-bit microprocessors and continued to use 8-bit machine language to compile their programs. The end result was two forms of 8-bit that looked and felt nothing alike.

If you dig deeper though, you will see an evolution take place between the 2600 and NES that can show you how changes in hardware development lead us from one to the other in visual terms. The Atari 5200, Intellivision and Colecovision, as well as computers of the era such as the Commodore 64, ZX Spectrum, Atari 800, and early PC’s all give us hands on examples of how changing hardware and its capabilities evolved 8-bit between 1977 and 1985. Games began to look better, and become more complicated, as ever increasing instruction sets played out. This gave the chance for many developers to bring their imaginations to graphical fruition. The 1982 Lucas-Arts game Rescue On Fractalus on Atari 800 and 5200 is a prime example of the evolution of 8-bit gaming between 1977 and 1985. Rescue On Fractalus, although now a relatively obscure game, pushed the boundaries of 8-bit gaming with a unique space/flight simulator experience that no other game of the time was offering. The neatly textured 3D terrain, characters, and complexity of play set the game apart from many of its simpler contemporaries of 1982. The game was able to show off the capabilities of the short lived Atari 5200, which up until that point had for the most part had been relegated to playing nothing more then upgraded versions of titles previous available on the Atari 2600. In essence Rescue On Fractalus was a preview of what 8-bit would come to look like on 3rd gen 8-bit systems. 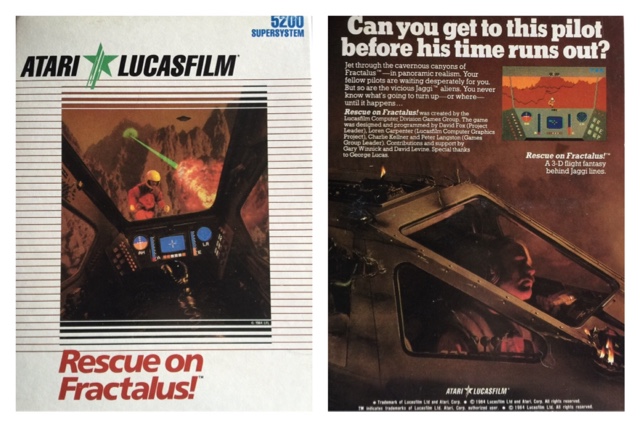 In this series I hope to get a clear definition of what 8-bit is from gaming podcaster’s who experienced it in its many forms when it was the only way to play. My end goal being to show you my reader the many incarnations of 8-bit, while expanding the way you perceive it. I look forward to the answers I’m going to get and eager to see what definitions many of you, my readers, might have yourselves.