Choplifter: Rescue From the Edge of Obscurity

There are video games out there that define a platform. Like Super Mario Brothers on the NES, Sonic on Genesis, or Asteroids on the Atari 2600. But then there are those video games out there that define video gaming as a whole. These are games that are memorable, fun, intuitive, and easy to operate, but challenging enough to keep you coming back for more. I’m sure anyone who has been around gaming long enough can name one that just epitomizes video gaming for them as a whole.
I have two that for me define video games for me, one is Moon Patrol, and the other is Choplifter, which I will be talking about right now.
My earliest memory of Choplifter is from when I was about 6 or so and my sister took me with her to go to a friends house. Being 6 I was bored easily by the chatter of two teenage girls, so my sisters friends mom, guided me into another room with what I believe was a Commodore 64. She put Choplifter on showed me how to play it, and I was hooked. As much as I loved it and played it for what must have been an hour straight, I never got the name of the game. So when I got home to tell my parents about it all they got was the incoherent ramblings of a 6 year old talking about a helicopter video game.
Fast forward three years and I’m at my friend Ryan’s house after school. Ryan had a Commodore 64 before I did and NES before I did. In those pre-NES days though we exchanged Commodore 64 games with each other or just went to each other’s houses to play. There was this one day he asked “Hey, wanna play Choplifter?”. “Chop a what now?” I asked thinking it was a game either about motorcycles, or shoplifting, or both. Then we began to play and it all came back to me, and now three years later I had the games name. One issue though, this was a pre-internet era with computer stores few and far between and Choplifter was no where to be found.
So Choplifter would remain elusive for a few more years to come. Then came my Nintendo Gameboy in 1991, and in Christmas of 1991 Choplifter would finally be mine. 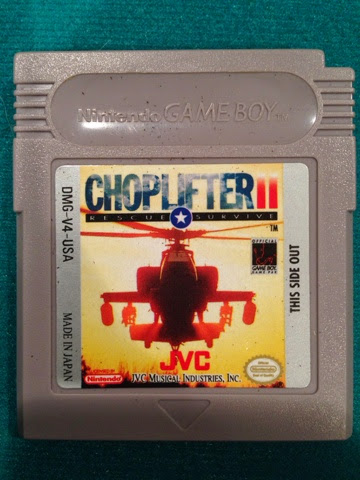 Choplifter II that is. This slightly more advanced version of the original not only has you saving POW’s from barracks at ground level, but in caves and tunnels. You find yourself fighting tanks, fighter jets, and other helicopters, as well as geysers, and stalactites. The game not only gave me the Choplifter fix I needed, but presented me with challenging and fun sequel.
Flash forward to March of 2014. I’ve just added an Atari 5200 and 7800 to my collection, and I’m looking to bring in more games for both. One of the first games to cross my path is the original Choplifter on the Atari 7800 which I bought off eBay for less then $5. Also I see a version on the Atari 5200 as well but it’s a little rarer, and I finally manage to get it into my collection in May.
The packaging and cover art are the same, but are they the same game? 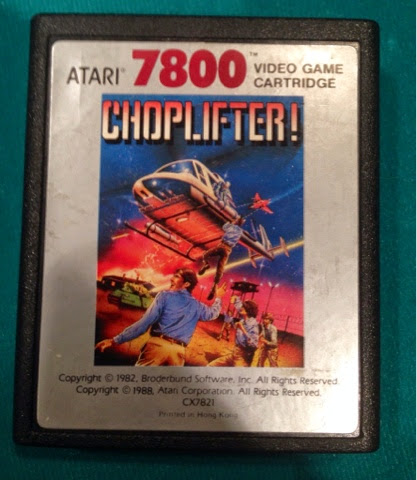 The 7800 version is really nice looking. It’s another great example of Atari showing us the 7800 was generation 3 worthy, by giving us some really detailed sprites and backgrounds. It’s a nice playing and a really good looking game that’s a joy to play. Although it is definitely Choplifter it’s not the one I recall playing as a 6 year old, but it’s a great version anyway. 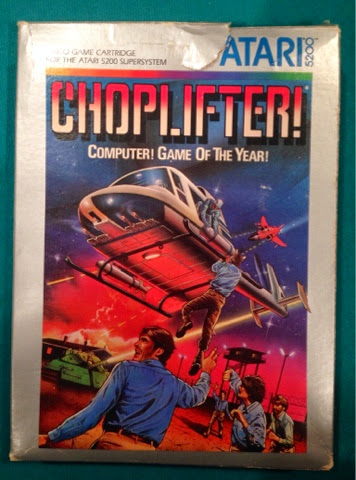 I put the 5200 version in and boom I’m six years old again. This is a much closer version of the Choplifter I first played. Blocky 8-bit, night background and all. It’s nice to compare and contrast the 5200 and 7800 with this game, and see how far “8-bit” came. The 5200 could produce 8-bit better then the Atari 2600, and gave us something comparable to early NES games, but lacked the 7800’s detail, indicative of late 8-bit. To say the least though this version is pure Choplifter joy. It looks great, it’s extremely fun to play, and it’s Choplifter at its most basic and best.
Choplifter’s legacy doesn’t end with Choplifter II though. Choplifter would actually live on into Gen 4 with Choplifter III on SNES.

Sadly, I don’t have this one yet. But it is definitely on my SNES wish list.
http://youtu.be/ufL32QTg0zY
Above is a great review and play through from YouTube. The game looks awesome with its 16-bit detail, and reminds me of Choplifter meets Contra. This is probably the most obscure of all the Choplifter versions.
I guess that’s the one thing that bothers me about Choplifter is its relative obscurity. It was a really phenomenal game with an original concept that was able to take it to a variety of platforms. At the same time though we as retro gamer’s never seem to hear it mentioned, even though it was one of the better games to have been out there in generations 2-4.
I’m writing this article to make everyone aware that Choplifter deserves to be remembered, and to make an effort to keep it from slipping into obscurity.