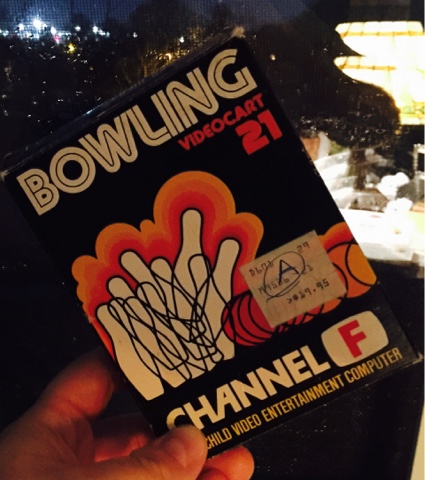 The box says Bowling Videocart 21. It’s a simple elegantly designed black box, dominated by Bowling pins and a red Bowlingball rolling at them. The box itself is in good shape but still a bit worn, after all it’s 37 years old. The sticker on the front says $19.95, it looks to be from a Toys R’ Us, or perhaps a Child’s World but it’s hard to tell, and it could easily be from one of a few thousand other places these games where sold. The center of the sticker has a pen written “A” with a circle around it, which if my memory’s of old toy stores serves me correct meant the item was on clearance at some point. As for the $19.95, that would have been a substantial sum in 1978 roughly equivalent to the $59 I just paid for Halo 5, of course whoever bought this game back then didn’t pay $19.95 for it (if it was on clearance that is) and I didn’t pay that much for it either in 2015, CIB and all. 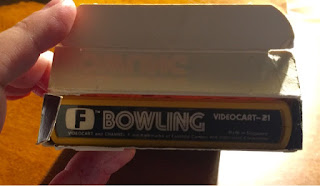 Of course as interesting or as uninteresting as you may consider my Sherlock Holmes appraisal of this box there is something I find even more interesting, the boxes size. Thats right its size! The box itself measures 5 1/2″ inches long, 4 1/8″ wide, and 7/8″ deep. OK, that may not sound impressive but consider this, the yellow Channel-F cart inside is 5 7/16″ inches long, 4″ wide and 3/4″ deep, meaning the cart just barely fits in the box, leaving only enough room for the manual. To go with a box this size was an interesting decision on the part of Fairchild for a few reasons, first for how tightly the cart fits in the box leaving little protection from theft or damage. Secondly is the fact that when this game was released at the end of 1978 into 1979, when Atari was already an established competitor of Fairchilds, yet their smaller carts measuring 3 3/4″ x 3″ x 3/4″ where given larger boxes measuring 7 1/2″ x 5 1/2 x 7/8″, adorned in bright colors, and with exciting and action packed original artwork. Of course any potential answers that can be derived here come from examining the Channel-F itself and its often overlooked and even forgotten history. 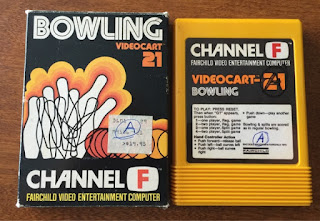 It may be up for debate but I think most of us who have a working knowledge of video game history consider the Fairchild Channel-F to be a pioneering piece of technology for two very distinctive reasons. One being that the Channel-F was the first system to ever offer fully interchangeable video game cartridges, and second and most importantly is it was the first console to ever feature an on-board microprocessor. These two distinct elements made it the first 2nd generation video game console, and an all around game changer (no pun intended) for the future of video game consoles. Or to put it another way, what it ushered in has historical implications that can still be felt today even in systems like the Xbox One, WiiU, and PS4, all of which still feature interchangeable games and onboard microprocessors.

To fully understand the impact of the Fairchild Channel-F though, I first need to take you back to 1976. In 1976 there where three different ways you could experience video games; the arcade, on a home computer or through a home video game console.

First of all lets start with the arcade. The best way I can explain the meaning of the arcade in pop culture all the way up until the early 90’s, is that the arcade is much like how movie theaters are now (or always have been). Suppose you go to the movies this evening, you buy your ticket, your soda, and your popcorn, than you sit down in your seat for an hour and a half to two (or more) and watch on. What you will experience in your trip to the theater this evening is seeing the latest movies, in the setting they where optimally made to be shown in. When it came to video games in 1976 the arcade machine was the equivalent to a movie theater now, the video arcades had the newest games in cabinets that where designed to hold the optimal hardware and play mechanisms, so that the player could experience the game as is was designed. Even to this day there is still nothing like playing an actual video arcade game in its original cabinet. There are of course caveats to arcade machines though, like the fact that you have to go to an arcade to play these games, and that you have to have a bushel of quarters to really experience a game through its completion,  not to mention that a favorite game could be switched out of an arcade at any time.

Than there is the home computer. Yes, there was a wide variety of home computers at the time but they where still rather primitive compared to what was on the horizon only a few short years later. There was however a variety of games available for these systems, but most of these games had to be typed into the computer from code, and the end result was often nothing more than an text adventure. All be it that may not sound like any fun, most computer enthusiasts of the time will swear by the joy of such activities and of playing text adventures. Of course as one final caveat to home computing was the cost of these units,  many of these systems some no more then un-built kits, had price tags of $600 or more, and that was in 1976 money too.

Lastly, there where home video game consoles of 1976. To put it lightly these systems where all basically Pong  and Pong clone type systems, all be it they were made by a variety of companies including Atari and Nintendo. The only real standout was Magnavox’s Odyssey, which some argue had interchangeable games before the Channel-F. In actuality the Odyssey’s game carts didn’t actually have video games on them but where, believe it you not, hardware extensions that modified the internally programmed game on the system itself. Ingenious yes, but the carts had no software on them at all. With that said to have a home console of any type at that time no doubt made you the talk of the neighborhood, but these consoles where are far cry from their arcade big brothers. In many ways you can modify the old adage about the color of Model-T’s to the generation 1 consoles of 1976 by saying “you can play any game you want as long as its Pong”.

Before the manufacturing and release of the Channel-F, Fairchild Semiconductor was well established in the microelectronics industry. Their products where sold far and wide to a myriad of manufactures for a number of uses in everything from industrial and corporate computer systems, to the arcade cabinets and the home computers mentioned above. So when electronics engineer Jerry Lawson was approached about the concept of designing a video game console for the company, he knew the company had what it took in resources and experience to enter into the bold task.

If you would like to learn more about Jerry Lawson the father of console gaming as we know it, be sure to check out the Channel-F Files podcast, and there recorded interview with Lawson on the designing and building of the Channel-F. http://thechannelffiles.blogspot.com/

Essentially, the system was designed to show off Fairchild’s F8 microprocessor, which for its time was exceptionally powerful and cutting edge. As time wore on though it became apparent that the entire system was to be cutting edge, including its controllers, arcade like games (not Pong), and interchangeable games. The concept of interchangeable cartridge based programs though wasn’t something Fairchild came up with on its own, since interchangeable cartridge type memory was being used since the early 70’s for commercial applications. However, these commercial memory carts had never been used for the storing, and quick accessing of a software programs, game or otherwise, before let alone unleashed on the consumer market. 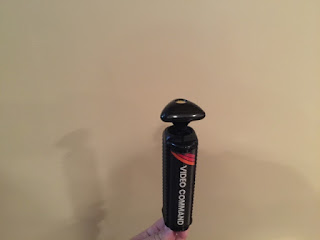 One of the true miracles of the Channel-F, is that the systems was on the market by Christmas time 1976, despite having only been a pipe-dream at the beginning of 1975. This means that Lawson and his team develop and designed a motherboard, cartridge system, and software for a system unlike anything seen before, plus Lawson’s personal crowning achievement the Channel-F’s controllers, and had it on the market less then a year and a half later. Of course such a modern marvel of cutting edge technology and R&D came with a costly price tag as well, about $170. In todays money that may not sound like much but it was +/- $750, in 1977 money when we factor in inflation, meaning the system sold for about as much as a buying an Xbox One and PS4 at together nowadays. Of course considering there was nothing else even remotely like it on the market, the Channel-F was a commercial success for Christmas of 1976, especially as consumers realized they where entering a new world of home video gaming.

With that said though Fairchild’s foray into the consumer video game market with the Channel-F was to be short lived success. Less then a year later Atari would release its Atari VCS (later known as the Atari 2600). Despite coming to the party a year late, and with its console costing $30 than that of the Channel-F, Atari came in with an immediate market advantage. Atari after all was a huge player in the arcade market, and that gave them enough street cred to get consumers attention, especially when they where releasing games on the system that many consumers played and loved in the arcade. After this the Channel-F would manage to hang on for a few more years, even getting a redesign with the Channel-F System II, but the redesign would also signal Fairchild selling its interest in the Channel-F to Zircon International in 1979 where the Channel-F’s story eventually came to a unceremonious and forgotten end. 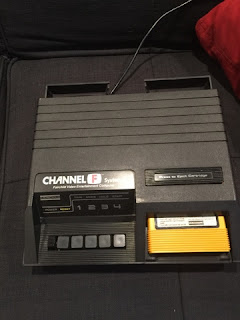 The rest to sound cliché “is history”, as Atari would dominate second generation gaming and go on to be known as an icon of console gaming and late 70’s and early 80’s pop culture. The Channel-F on the other hand faded quickly into obscurity with little if anything known about the important role the system played in the world of gaming we knew, and still currently know. Luckily, for the Channel-F and those of us eager to learn more about gaming history, the retro gaming movement of the past 5 to 10 years has bought many forgotten systems like the Channel-F back into gamers consciousness, and the story of the Channel-F, and its legacy to everything we know as gamers, has become a bit more well stated. The Channel-F like many system of a pre-Atari 2600 era still sits on the teetering balance of being forgotten to time, especially when many younger gamers believe gaming started at the Atari 2600.

So as I sit here starring at the box for Bowling Videocart -21, I realize this box has a story to tell that lies beyond its own personal history, and into the history of all of home gaming.